By Reef and Palm 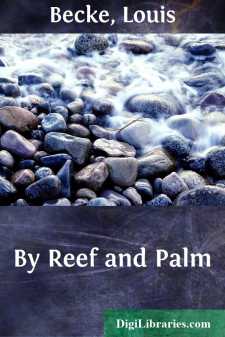 When in October, 1870, I sailed into the harbour of Apia, Samoa, in the ill-fated ALBATROSS, Mr Louis Becke was gaining his first experiences of island life as a trader on his own account by running a cutter between Apia and Savai'i.

It was rather a notable moment in Apia, for two reasons. In the first place, the German traders were shaking in their shoes for fear of what the French squadron might do to them, and we were the bearers of the good news from Tahiti that the chivalrous Admiral Clouet, with a very proper magnanimity, had decided not to molest them; and, secondly, the beach was still seething with excitement over the departure on the previous day of the pirate Pease, carrying with him the yet more illustrious "Bully" Hayes.

It happened in this wise. A month or two before our arrival, Hayes had dropped anchor in Apia, and some ugly stories of recent irregularities in the labour trade had come to the ears of Mr Williams, the English Consul. Mr Williams, with the assistance of the natives, very cleverly seized his vessel in the night, and ran her ashore, and detained Mr Hayes pending the arrival of an English man-of-war to which he could be given in charge. But in those happy days there were no prisons in Samoa, so that his confinement was not irksome, and his only hard labour was picnics, of which he was the life and soul. All went pleasantly until Mr Pease—a degenerate sort of pirate who made his living by half bullying, half swindling lonely white men on small islands out of their coconut oil, and unarmed merchantmen out of their stores—came to Apia in an armed ship with a Malay crew. From that moment Hayes' life became less idyllic. Hayes and Pease conceived a most violent hatred of each other, and poor old Mr Williams was really worried into an attack of elephantiasis (which answers to the gout in those latitudes) by his continual efforts to prevent the two desperadoes from flying at each other's throat. Heartily glad was he when Pease—who was the sort of man that always observed LES CONVENANCES when possible, and who fired a salute of twenty-one guns on the Queen's Birthday—came one afternoon to get his papers "all regular," and clear for sea. But lo! the next morning, when his vessel had disappeared, it was found that his enemy Captain Hayes had disappeared also, and the ladies of Samoa were left disconsolate at the departure of the most agreeable man they had ever known.

However, all this is another story, as Mr Kipling says, and one which I hope Mr Becke will tell us more fully some day, for he knew Hayes well, having acted as supercargo on board his ship, and shared a shipwreck and other adventures with him.

But even before this date Mr Becke had had as much experience as falls to most men of adventures in the Pacific Ocean.

Born at Port Macquarrie in Australia, where his father was clerk of petty sessions, he was seized at the age of fourteen with an intense longing to go to sea. It is possible that he inherited this passion through his mother, for her father, Charles Beilby, who was private secretary to the Duke of Cumberland, invested a legacy that fell to him in a small vessel, and sailed with his family to the then very new world of Australia....