Burma Peeps at Many Lands 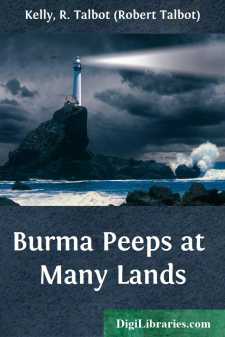 How many boys or girls, I wonder, ever turn to their school atlas for amusement, or try to picture to themselves what manner of countries those might be whose strange and unfamiliar place-names so often make their geography lesson a difficulty?

Yet there are few subjects, I think, which might be made more interesting than geography, and a map may often serve to suggest delightful fancies to a boy or girl of imagination.

Open your atlas at random and see what it has to tell you. Here, perhaps in the heart of a great continent, stretches a mountain range, and from it in many directions wind those serpent-like lines which denote rivers.

Following these lines in their course, through narrow valleys or wide plains, we notice that upon their banks presently appear those towns and cities whose names you so often find it difficult to remember, and at length, frequently by many mouths that cut up the delta it has formed, the river eventually finds its way into the sea.

These are the simple facts our map gives us, but there is a great deal of poetry behind. That mountain range is Nature's means of attracting and holding the moisture-laden clouds which have been blown in from the sea, and either in the form of rain or snow it stores up the water evaporated from it.

By thousands of little rills, or rushing torrents which score furrows in its sides, the mountain gives up its store of water to feed the thirsty plains, and with it yields also valuable ores and minerals, which are often carried many many miles away to enrich a people too far removed from the mountain to know the origin of their wealth.

These little streamlets are not marked upon your map, but presently they join to form one combined river, by which, through the many hundreds of miles of its windings, the mountain eventually returns its gathered waters to the sea, from whence they came.

How interesting to follow the course of such a river, and try to picture to oneself all it may have to show! What kind of mountain is it from among whose rugged snow peaks first sprang those plunging cascades, which, leaping and tossing over their rocky beds, join each other at its base to form the river itself? Through what wild forests, filled with curious vegetation, may it not flow, and how strange, perhaps, are the people who, together with wild beasts and unknown birds, inhabit its reedy margins!

As the river grows in size, the grass huts and dug-out canoes of its upper waters give place to towns which bear names, while large and strangely-shaped boats carry the produce of the country to some great seaport at its mouth, where ships of all nations are waiting to transport it over thousands of miles of ocean to supply us with those many commodities which we have come to regard as daily necessities! If boys and girls would think of such things geography, I am sure, would never be a dull study.

Now, to turn from an imaginary case to a real one, I want to tell you something about Burma, a country which, though one of the most interesting and beautiful in the world, is comparatively little known to the majority of people....