Burke's Speech on Conciliation with America 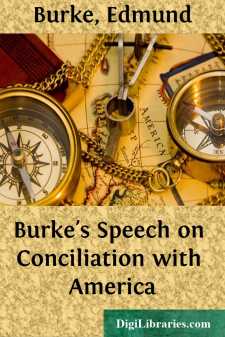 In 1651 originated the policy which caused the American Revolution. That policy was one of taxation, indirect, it is true, but none the less taxation. The first Navigation Act required that colonial exports should be shipped to England in American or English vessels. This was followed by a long series of acts, regulating and restricting the American trade. Colonists were not allowed to exchange certain articles without paying duties thereon, and custom houses were established and officers appointed. Opposition to these proceedings was ineffectual; and in 1696, in order to expedite the business of taxation, and to establish a better method of ruling the colonies, a board was appointed, called the Lords Commissioners for Trade and Plantations. The royal governors found in this board ready sympathizers, and were not slow to report their grievances, and to insist upon more stringent regulations for enforcing obedience. Some of the retaliative measures employed were the suspension of the writ of habeas corpus, the abridgment of the freedom of the press and the prohibition of elections. But the colonists generally succeeded in having their own way in the end, and were not wholly without encouragement and sympathy in the English Parliament. It may be that the war with France, which ended with the fall of Quebec, had much to do with this rather generous treatment. The Americans, too, were favored by the Whigs, who had been in power for more than seventy years. The policy of this great party was not opposed to the sentiments and ideas of political freedom that had grown up in the colonies; and, although more than half of the Navigation Acts were passed by Whig governments, the leaders had known how to wink at the violation of nearly all of them.

Immediately after the close of the French war, and after George III. had ascended the throne of England, it was decided to enforce the Navigation Acts rigidly. There was to be no more smuggling, and, to prevent this, Writs of Assistance were issued. Armed with such authority, a servant of the king might enter the home of any citizen, and make a thorough search for smuggled goods. It is needless to say the measure was resisted vigorously, and its reception by the colonists, and its effect upon them, has been called the opening scene of the American Revolution. As a matter of fact, this sudden change in the attitude of England toward the colonies, marks the beginning of the policy of George III. which, had it been successful, would have made him the ruler of an absolute instead of a limited monarchy. He hated the Tories only less than the Whigs, and when he bestowed a favor upon either, it was for the purpose of weakening the other. The first task he set himself was that of crushing the Whigs. Since the Revolution of 1688, they had dictated the policy of the English government, and through wise leaders had become supreme in authority. They were particularly obnoxious to him because of their republican spirit, and he regarded their ascendency as a constant menace to his kingly power....