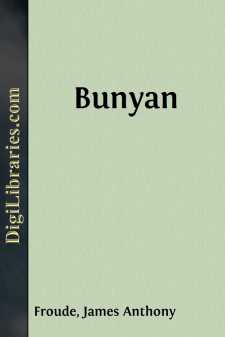 'I was of a low and inconsiderable generation, my father's house being of that rank that is meanest and most despised of all families in the land.' 'I never went to school, to Aristotle or Plato, but was brought up in my father's house in a very mean condition, among a company of poor countrymen.' 'Nevertheless, I bless God that by this door He brought me into the world to partake of the grace and life that is by Christ in His Gospel.' This is the account given of himself and his origin by a man whose writings have for two centuries affected the spiritual opinions of the English race in every part of the world more powerfully than any book or books, except the Bible.

John Bunyan was born at Elstow, a village near Bedford, in the year 1628. It was a memorable epoch in English history, for in that year the House of Commons extorted the consent of Charles I. to the Petition of Right. The stir of politics, however, did not reach the humble household into which the little boy was introduced. His father was hardly occupied in earning bread for his wife and children as a mender of pots and kettles: a tinker,—working in neighbours' houses or at home, at such business as might be brought to him. 'The Bunyans,' says a friend, 'were of the national religion, as men of that calling commonly were.' Bunyan himself, in a passage which has been always understood to refer to his father, describes him 'as an honest poor labouring man, who, like Adam unparadised, had all the world to get his bread in, and was very careful to maintain his family.' In those days there were no village schools in England; the education of the poor was an apprenticeship to agriculture or handicraft; their religion they learnt at home or in church. Young Bunyan was more fortunate. In Bedford there was a grammar school, which had been founded in Queen Mary's time by the Lord Mayor of London, Sir William Harper. Hither, when he was old enough to walk to and fro, over the mile of road between Elstow and Bedford, the child was sent, if not to learn Aristotle and Plato, to learn at least 'to read and write according to the rate of other poor men's children.'

If religion was not taught at school, it was taught with some care in the cottages and farmhouses by parents and masters. It was common in many parts of England, as late as the end of the last century, for the farmers to gather their apprentices about them on Sunday afternoons, and to teach them the Catechism. Rude as was Bunyan's home, religious notions of some kind had been early and vividly impressed upon him. He caught, indeed, the ordinary habits of the boys among whom he was thrown. He learnt to use bad language, and he often lied. When a child's imagination is exceptionally active, the temptations to untruth are correspondingly powerful. The inventive faculty has its dangers, and Bunyan was eminently gifted in that way. He was a violent, passionate boy besides, and thus he says of himself that for lying and swearing he had no equal, and that his parents did not sufficiently correct him....