Buds and Bird Voices (From "Mosses from an Old Manse") 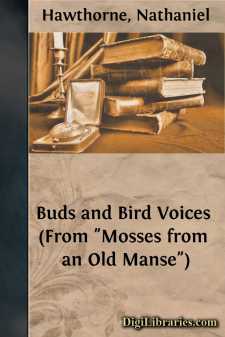 Balmy Spring—weeks later than we expected and months later than we longed for her—comes at last to revive the moss on the roof and walls of our old mansion. She peeps brightly into my study-window, inviting me to throw it open and create a summer atmosphere by the intermixture of her genial breath with the black and cheerless comfort of the stove. As the casement ascends, forth into infinite space fly the innumerable forms of thought or fancy that have kept me company in the retirement of this little chamber during the sluggish lapse of wintry weather; visions, gay, grotesque, and sad; pictures of real life, tinted with nature's homely gray and russet; scenes in dreamland, bedizened with rainbow hues which faded before they were well laid on,—all these may vanish now, and leave me to mould a fresh existence out of sunshine, Brooding Meditation may flap her dusky wings and take her owl-like Right, blinking amid the cheerfulness of noontide. Such companions befit the season of frosted window-panes and crackling fires, when the blast howls through the black-ash trees of our avenue and the drifting snow-storm chokes up the wood-paths and fills the highway from stone wall to stone wall. In the spring and summer time all sombre thoughts should follow the winter northward with the sombre and thoughtful crows. The old paradisiacal economy of life is again in force; we live, not to think or to labor, but for the simple end of being happy. Nothing for the present hour is worthy of man's infinite capacity save to imbibe the warm smile of heaven and sympathize with the reviving earth.

The present Spring comes onward with fleeter footsteps, because Winter lingered so unconscionably long that with her best diligence she can hardly retrieve half the allotted period of her reign. It is but a fortnight since I stood on the brink of our swollen river and beheld the accumulated ice of four frozen months go down the stream. Except in streaks here and there upon the hillsides, the whole visible universe was then covered with deep snow, the nethermost layer of which had been deposited by an early December storm. It was a sight to make the beholder torpid, in the impossibility of imagining how this vast white napkin was to be removed from the face of the corpse-like world in less time than had been required to spread it there. But who can estimate the power of gentle influences, whether amid material desolation or the moral winter of man's heart? There have been no tempestuous rains, even no sultry days, but a constant breath of southern winds, with now a day of kindly sunshine, and now a no less kindly mist or a soft descent of showers, in which a smile and a blessing seemed to have been steeped. The snow has vanished as if by magic; whatever heaps may be hidden in the woods and deep gorges of the hills, only two solitary specks remain in the landscape; and those I shall almost regret to miss when to-morrow I look for them in vain. Never before, methinks, has spring pressed so closely on the footsteps of retreating winter. Along the roadside the green blades of grass have sprouted on the very edge of the snow-drifts. The pastures and mowing-fields have not vet assumed a general aspect of verdure; but neither have they the cheerless-brown tint which they wear in latter autumn when vegetation has entirely ceased; there is now a faint shadow of life, gradually brightening into the warm reality. Some tracts in a happy exposure,—as, for instance, yonder southwestern slope of an orchard, in front of that old red farm-house beyond the river,—such patches of land already wear a beautiful and tender green, to which no future luxuriance can add a charm. It looks unreal; a prophecy, a hope, a transitory effect of sonic peculiar light, which will vanish with the slightest motion of the eye. But beauty is never a delusion; not these verdant tracts, but the dark and barren landscape all around them, is a shadow and a dream. Each moment wins seine portion of the earth from death to life; a sudden gleam of verdure brightens along the sunny slope of a bank which an instant ago was brown and bare. You look again, and behold an apparition of green grass!

The trees in our orchard and elsewhere are as yet naked, but already appear full of life and vegetable blood. It seems as if by one magic touch they might instantaneously burst into full foliage, and that the wind which now sighs through their naked branches might make sudden music amid innumerable leaves. The mossgrown willow-tree which for forty years past has overshadowed these western windows will be among the first to put on its green attire....