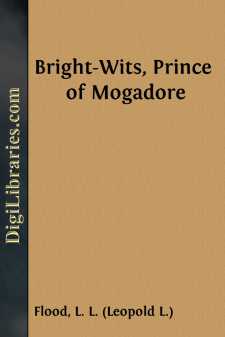 CHAPTER I BRIGHT-WITS ARRIVES IN PARRABANG, WHERE HE MEETS THE BEAUTIFUL AZALIA AND BEGINS HIS EXTRAORDINARY TASKS

Long ago, before geographies were invented, so that it were useless to seek for the kingdom on any modern map, there lived a wise King who had but one son, of whom he was exceeding fond. Under the guidance of learned teachers the young prince had read the Koran according to the seven traditions, studied the writings of the poets and the science of the stars, and had become skilled in all the arts and manly exercises to a degree far surpassing the people of his age; so that his fame had spread and he was known far and near as "Bright-Wits," Prince of Mogadore. In person, the prince was comely beyond the beauty of men; and he possessed the strength and courage of the lion, together with the gentleness of the dove.

Now when Bright-Wits had reached his eighteenth year, the king called him to his side and said, "My son, you have arrived at the age when it befits you to fare forth into the world that your education may be completed by a knowledge of the ways of men. That when the Great Yama shall gather me to His bosom you will be prepared to assume the government of this kingdom and to conduct its affairs wisely and well. And, lest your inexperience should lead you from the paths of wisdom, I have arranged that you be accompanied on your journey by Ablano, the Holy Brahman, who has lately come to our realm. On the morrow, then, you will be prepared to start in company with an escort of horsemen and a train of camels as befits your rank and station."

At dawn the caravan was drawn up outside the gates of the city, and Bright-Wits, after embracing his father, mounted a richly caparisoned horse, and rode away with Ablano, the Brahman, riding on a camel at his side. Now, although Bright-Wits was arrayed in the richest of garments, the Brahman was simply appareled in the white robes of his order; his only ornament being three great rings of gold encircling the cone above his turban. His face, which was dark as that of an African, his snowy beard, and his air of majestic dignity gave him a most noble and striking appearance.

For some days the caravan journeyed forward, Bright-Wits filled with constant wonder by the sight of strange cities and people. At last, after weeks of travel they came upon a defile in the mountains, and passing through, emerged on a wide plain. Far to the north they could discern the golden towers of an immense palace rising high above a large and prosperous city. Thither they pursued their way, entering at last the great gate in the outer walls they proceeded through the city, Bright-Wits constantly pausing to exclaim at the size and magnificence of the buildings; which surpassed those of his father's capital as gold surpasses copper.

Arriving before the palace, Bright-Wits dismounted, and advanced, accompanied only by Ablano. As they neared the magnificent edifice they descried, seated upon a low porch, the figure of a fat and oily looking old man, wearing on his head a huge turban topped with a golden crown which was surmounted by a ruby large as a peacock's egg....