Brave and True Short stories for children by G. M. Fenn and Others 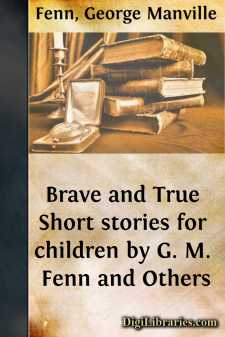 Brave and True, by E Dawson.

“But I say, Martin, tell us about it! My pater wrote to me that you’d done no end of heroic things, and saved Bullace senior from being killed. His pater told him, so I know it’s all right. But wasn’t it a joke you two should be on the same ship?”

Martin looked up at his old schoolfellow. He had suddenly become a person of importance in the well-known old haunts where he had learned and played only as one of the schoolboys.

“It wasn’t much of a joke sometimes,” said he. “I thought at first that I was glad to see a face I knew. But there were lots of times after that when I didn’t think it.”

“He was never particularly partial to me, you know,” answered Martin. “The first term I was at school—before you came—I remember I caught him out at a cricket match. He was always so sure of making top score! He called me an impudent youngster in those days.”

“He never was too good to you, I remember. I was one of the chaps he let alone.”

“Well, he went on calling me an impudent youngster,” continued Martin, “and all that sort of thing—and he tried to set the other fellows against me. Oh, it isn’t all jam in the Royal Navy! You haven’t left school when you go there, and the gunroom isn’t always just exactly paradise, you know! And if your seniors try to make it hot for you, why—they can!”

“So you and Bullfrog didn’t exactly hit it off?”

“Oh, well, he was sub-lieutenant this last voyage, and you can’t stand up to your senior officer as you can to your schoolfellows, don’t you see?”

There was a minute’s silence, broken by an eager request. “But tell us about the battle. What did it feel like to be there? How was it old Bullfrog let you go at all?”

“He hadn’t the ordering of that, thank goodness,” said Martin fervently. “And I was jolly glad he hadn’t! We had some excitement getting those big guns along, I can tell you! The roads weren’t just laid out for that game.”

“Well, go on,” said another eager voice. “Then one day we came upon the enemy, and there was a stand-up fight, you know. How did it feel? Well, there wasn’t much thinking about it. You just knew that you were ready to blaze at them, and they were popping at you from their entrenchments; and that you jolly well meant to give them the worst of it.”

“Oh, that was nothing,” said Martin, reddening. “He must have got excited or something, for he took a step forward, putting himself in full view, and just then I saw what he didn’t see—that there were some of those Boer beggars just under our kopje, and that one of them had raised his rifle to pick off Bullfrog. So I made a flying leap on to his back and knocked him flat, and the bullet that was meant for him just crossed the back of my coat and ripped it up. Didn’t even scratch me!”

The little knot of listeners around Martin waited with bated breath for more.

“But he didn’t escape scot-free after all,” continued Martin....