Brave and Bold The Fortunes of Robert Rushton 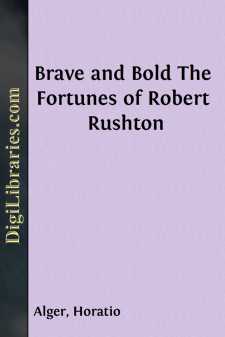 CHAPTER I. THE YOUNG RIVALS.

The main schoolroom in the Millville Academy was brilliantly lighted, and the various desks were occupied by boys and girls of different ages from ten to eighteen, all busily writing under the general direction of Professor George W. Granville, Instructor in Plain and Ornamental Penmanship.

Professor Granville, as he styled himself, was a traveling teacher, and generally had two or three evening schools in progress in different places at the same time. He was really a very good penman, and in a course of twelve lessons, for which he charged the very moderate price of a dollar, not, of course, including stationery, he contrived to impart considerable instruction, and such pupils as chose to learn were likely to profit by his instructions. His venture in Millville had been unusually successful. There were a hundred pupils on his list, and there had been no disturbance during the course of lessons.

At nine precisely, Professor Granville struck a small bell, and said, in rather a nasal voice:

"You will now stop writing."

There was a little confusion as the books were closed and the pens were wiped.

"Ladies and gentlemen," said the professor, placing one arm under his coat tails and extending the other in an oratorical attitude, "this evening completes the course of lessons which I have had the honor and pleasure of giving you. I have endeavored to impart to you an easy and graceful penmanship, such as may be a recommendation to you in after life. It gives me pleasure to state that many of you have made great proficiency, and equaled my highest expectations. There are others, perhaps, who have not been fully sensible of the privileges which they enjoyed. I would say to you all that perfection is not yet attained. You will need practice to reap the full benefit of my instructions. Should my life be spared, I shall hope next winter to give another course of writing lessons in this place, and I hope I may then have the pleasure of meeting you again as pupils. Let me say, in conclusion, that I thank you for your patronage and for your good behavior during this course of lessons, and at the same time I bid you good-by."

With the closing words, Professor Granville made a low bow, and placed his hand on his heart, as he had done probably fifty times before, on delivering the same speech, which was the stereotyped form in which he closed his evening schools.

There was a thumping of feet, mingled with a clapping of hands, as the professor closed his speech, and a moment later a boy of sixteen, occupying one of the front seats, rose, and, advancing with easy self-possession, drew from his pocket a gold pencil case, containing a pencil and pen, and spoke as follows:

"Professor Granville, the members of your writing class, desirous of testifying their appreciation of your services as teacher, have contributed to buy this gold pencil case, which, in their name, I have great pleasure in presenting to you. Will you receive it with our best wishes for your continued success as a teacher of penmanship?"

With these words, he handed the pencil to the professor and returned to his seat....