Bracebridge Hall, or The Humorists 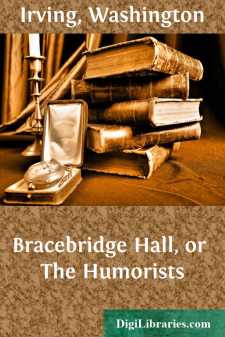 The ancient house, and the best for housekeeping in this county or the next; and though the master of it write but squire, I know no lord like him.

The reader, if he has perused the volumes of the Sketch-Book, will probably recollect something of the Bracebridge family, with which I once passed a Christmas. I am now on another visit to the Hall, having been invited to a wedding which is shortly to take place. The Squire's second son, Guy, a fine, spirited young captain in the army, is about to be married to his father's ward, the fair Julia Templeton. A gathering of relations and friends has already commenced, to celebrate the joyful occasion; for the old gentleman is an enemy to quiet, private weddings. "There is nothing," he says, "like launching a young couple gayly, and cheering them from the shore; a good outset is half the voyage."

Before proceeding any farther, I would beg that the Squire might not be confounded with that class of hard-riding, foxhunting gentlemen so often described, and, in fact, so nearly extinct in England. I use this rural title partly because it is his universal appellation throughout the neighbourhood, and partly because it saves me the frequent repetition of his name, which is one of those rough old English names at which Frenchmen exclaim in despair.

The Squire is, in fact, a lingering specimen of the old English country gentleman; rusticated a little by living almost entirely on his estate, and something of a humourist, as Englishmen are apt to become when they have an opportunity of living in their own way. I like his hobby passing well, however, which is, a bigoted devotion to old English manners and customs; it jumps a little with my own humor, having as yet a lively and unsated curiosity about the ancient and genuine characteristics of my "father land."

There are some traits about the Squire's family, also, which appear to me to be national. It is one of those old aristocratical families, which, I believe, are peculiar to England, and scarcely understood in other countries; that is to say, families of the ancient gentry, who, though destitute of titled rank, maintain a high ancestral pride; who look down upon all nobility of recent creation, and would consider it a sacrifice of dignity to merge the venerable name of their house in a modern title.

This feeling is very much fostered by the importance which they enjoy on their hereditary domains. The family mansion is an old manor-house, standing in a retired and beautiful part of Yorkshire. Its inhabitants have been always regarded, through the surrounding country, as "the great ones of the earth;" and the little village near the Hall looks up to the Squire with almost feudal homage. An old manor-house, and an old family of this kind, are rarely to be met with at the present day; and it is probably the peculiar humour of the Squire that has retained this secluded specimen of English housekeeping in something like the genuine old style.

I am again quartered in the panelled chamber, in the antique wing of the house....