Boys their Work and Influence 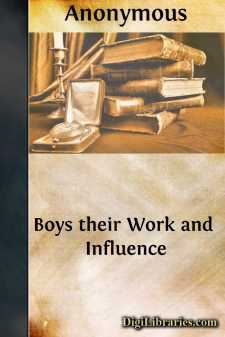 The following papers were written at the request of one who had read the somewhat similar papers addressed to girls.  The object aimed at in both books has been to try and help Boys and Girls of the so-called working classes to recognize their duties to God and their neighbour, and to use on the side of right the powers and opportunities which God has given them.

It seems to the author that advice given to the so-called lower orders, often partakes too much of patronage, and too little of the brotherhood, that should be a sign of Christians.  “Do as you are told and be thankful,” is too much the tone of the advice, instead of explaining duties, pointing out opportunities, and recognizing them as fellow-labourers in the great work.

In God’s household everyone has his place assigned to him by the master, some to govern, and some to serve, but still all are fellow-servants of that one Master, and brethren in Christ.

What a curious fellow a boy is.  I wonder if boys ever think about themselves.  A young monkey is full of mischief, a young puppy is full of play, a young kitten is always ready for fun, but a boy seems to combine the qualities of all three, and to have a stock of his own to jumble up with them.  A boy has so many sides, not only an outside and an inside; he is a many sided being.  See him at one time and you would hardly suppose him to be the same creature that you had seen a little while before.  Now he is a bright nice spoken lad, in a few moments he is a bullying tyrant, now he is courteously answering those who speak to him, now words come from his lips that shock the hearer.  Now he would scorn to have his word doubted by a comrade, now he does not hesitate to lie to escape punishment.  Now fearless, now a coward, now full of spirits, now in the depths of woe—sunshine or joy, wind and calm, silence and tumult, all seem to have their place, and to make up that incomprehensible and yet delightful animal a boy.

Now boys, I want you to think of yourselves—not to think how good or how bad you are—what fine fellows you are, and what important persons, but what you are capable of becoming.  You will not remain boys always—you are now, in the midst of all your oddities, forming your character, and shaping your future course, drawing out of the midst of all your contradictions the character that will make you honest God-fearing men, like in your degree to the perfect pattern of manhood which God has set before us in Christ—or you are letting yourselves be moulded into the selfish sensual being, which too often degrades the name of man.

Thinking, I know, is not much in your line at present, but you will perhaps spare me a few minutes, and give me a little of your attention while I try to point out to you the way in which you may, if you will, turn your powers to account, and avoid the dangers which have been the shipwreck of many a lad’s bright prospects.

I shall take it for granted that you care for your parents and home, or at any rate that you would like to have a comfortable home.  Well, then, make it so yourself.  You can do a great deal towards it.  Honour and obedience is your first duty towards your parents.  There is nothing manly in disobedience.  Honour and obey, readily and cheerfully.  Not simply obedient to father because he might thrash you; and disobedient to mother because she cannot compel you.  No, the truest honour in a boy is when mother can thoroughly trust him—trust him to obey her because she is mother.

Brothers and sisters are often a trouble.  “How those children do nag?”  “Never can leave those boys together.”  “He’s sure to teaze her if I leave them alone.”  Don’t be a bully either to your brothers or sisters.  Don’t be selfish and claim all you can for yourself.  Share and share alike should be the rule, and gentleness towards the girls and little ones.