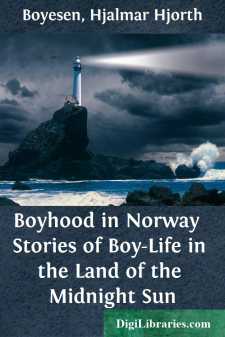 I. THE ORIGIN OF THE WAR

A deadly feud was raging among the boys of Numedale. The East-Siders hated the West-Siders, and thrashed them when they got a chance; and the West-Siders, when fortune favored them, returned the compliment with interest. It required considerable courage for a boy to venture, unattended by comrades, into the territory of the enemy; and no one took the risk unless dire necessity compelled him.

The hostile parties had played at war so long that they had forgotten that it was play; and now were actually inspired with the emotions which they had formerly simulated. Under the leadership of their chieftains, Halvor Reitan and Viggo Hook, they held councils of war, sent out scouts, planned midnight surprises, and fought at times mimic battles. I say mimic battles, because no one was ever killed; but broken heads and bruised limbs many a one carried home from these engagements, and unhappily one boy, named Peer Oestmo, had an eye put out by an arrow.

It was a great consolation to him that he became a hero to all the West-Siders and was promoted for bravery in the field to the rank of first lieutenant. He had the sympathy of all his companions in arms and got innumerable bites of apples, cancelled postage stamps, and colored advertising-labels in token of their esteem.

But the principal effect of this first serious wound was to invest the war with a breathless and all-absorbing interest. It was now no longer "make believe," but deadly earnest. Blood had flowed; insults had been exchanged in due order, and offended honor cried for vengeance.

It was fortunate that the river divided the West-Siders from the East-Siders, or it would have been difficult to tell what might have happened. Viggo Hook, the West-Side general, was a handsome, high-spirited lad of fifteen, who was the last person to pocket an injury, as long as red blood flowed in his veins, as he was wont to express it. He was the eldest son of Colonel Hook of the regular army, and meant some day to be a Von Moltke or a Napoleon. He felt in his heart that he was destined for something great; and in conformity with this conviction assumed a superb behavior, which his comrades found very admirable.

He had the gift of leadership in a marked degree, and established his authority by a due mixture of kindness and severity. Those boys whom he honored with his confidence were absolutely attached to him. Those whom, with magnificent arbitrariness, he punished and persecuted, felt meekly that they had probably deserved it; and if they had not, it was somehow in the game.

There never was a more absolute king than Viggo, nor one more abjectly courted and admired. And the amusing part of it was that he was at heart a generous and good-natured lad, but possessed with a lofty ideal of heroism, which required above all things that whatever he said or did must be striking. He dramatized, as it were, every phrase he uttered and every act he performed, and modelled himself alternately after Napoleon and Wellington, as he had seen them represented in the old engravings which decorated the walls in his father's study....