Boy Scouts on Motorcycles Or, With the Flying Squadron 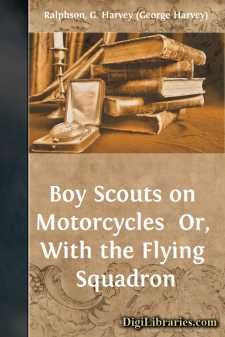 CHAPTER I BOY SCOUTS IN A STRANGE LAND

"Fine country, this—to get out of!"

Jimmie McGraw, the first speaker, turned back to the interior of the apartment in which he stood with a look of intense disgust on freckled face.

"Oh, nothin' much," he replied, wrinkling his nose comically, "only Broadway an' the Bowery are too far away from this town to ever amount to anythin'. Say, how would you fellers like a chair in front of the grate in the little old Black Bear Patrol clubroom, in the village of N. Y.? What?"

The three boys lying, half covered with empty burlap bags, on the bare earth at the back of the apartment chuckled softly as Jimmie's face brightened at the small picture he drew verbally, of the luxurious Boy Scout clubroom in the City of New York.

"New York is a barren island as compared with this place," one of the boys, Jack Bosworth by name, declared. "Just think of the odor of the Orient all around us!"

Jimmie wrinkled his nose in disdain and turned back to the window out of which he had been looking. The other boys, Ned Nestor, of the Wolf Patrol, and Jack Bosworth and Frank Shaw, of the Black Bear Patrol, all of New York, pulled their coarse covering closer under their chins and grinned at the impatient Jimmie, who was of the Wolf Patrol, and who was just then on guard.

It wasn't much of a window that the boy looked out of, just an irregular hole in a bare wall, innocent alike of sash and glass. Away to the east rolled the restless waters of the Gulf of Pechili, which is little more than a round bay swinging west from the mystical Yellow Sea.

To the south ran the swift current of the Peiho river, on the opposite bank of which lay the twin of Taku, Chinese town where Jimmie stood guard. Tungku, as the twin village is named, looked every bit as forlorn and disreputable as Taku, where the boys had waited four days for important information which had been promised by the Secret Service department at Washington.

The gulf of Pechili and the Peiho river glistened under the October sun, which seemed to bring little warmth to the atmosphere. Junks of all sizes and kinds were moving slowly through the waves, and farther out larger vessels lay at anchor, as if holding surveillance over the mouth of the stream which led to Tientsin, that famous city of the great Chinese nation.

Jimmie pointed out of the opening, his hand swinging about to include the river and the gulf, the slowly moving boats and the picturesque streets.

"'Tis a heathen land!" the boy went on. "They wear their shirts outside of their trousers an' do their trucking on their shoulders. Say, Ned," he added, "why can't we cut it out? I'm sick of it!"

"Cut it out?" laughed Jack Bosworth, "why, kid, we've just got to the land of promise!"

"Most all promise!" replied Jimmie. "We've got nothin' but promises since we've been here. Where's that Secret Service feller that was goin' to set the pace for us?"