Boy Scouts on Hudson Bay Or, The Disappearing Fleet 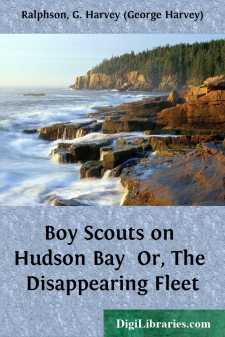 CHAPTER I. THE FIVE CHUMS IN CAMP.

"Sure it's me that hopes we've seen the last tough old carry on this same wild-goose chase up to the Frozen North!"

"Hello! there, is that you, Jimmy, letting out that yawp? I thought you had more sporting blood in you than to throw up your hands like that!"

"Oh! well I sometimes say things that don't come from the heart, you know, Jack. Wait, me boy, till I get good and rested up, and mebbe I'll sing a different tune. Ask Ned here if it's me that often shows the white flag when trouble comes."

"Well, I should say not, Jimmy McGraw. There never was a more stubborn nature in all New York than you, once you'd set your mind on anything. That talk of being discouraged is all on the surface. A thousand cataracts wouldn't keep you from getting to Hudson Bay in the end, if you'd said you meant to reach open water. And Jack Bosworth knows that as well as I do."

"That's right; I do," laughed the party mentioned as Jack, as he slapped Jimmy on the back. "I've seen him tested and tried out many the time, and never once did he squeal. I was only joking, Jimmy; you understand?"

"And sure that's what I was doing when I grunted about the carry. It was next door to a picnic down Coney Island way, and I don't care how many more times the lot of us have to pack canoes and duffle from one creek to another. But Francois here is after saying we're getting near the end of our long voyage, and Tamasjo, the red Injun, backs him up. So let's try and forget our troubles, and settle down for a decent night's rest."

"First of all, we'll get the tent up, because it looks a little like it might rain before morning," remarked the boy who had been designated as Ned, and whom the other four seemed to look upon in the light of leader.

All of them were garbed in the familiar khaki of the Boy Scouts, and from their actions it would seem as though long familiarity with outdoor life had made this thing of pitching camp second nature with every one of the five well-grown lads.

These boys with their guides were a long way from home. Hundreds upon hundreds of miles separated them from the great metropolis of New York City, where the troop to which they belonged had its headquarters.

Those readers who have had the pleasure of meeting the five husky scouts in the pages of previous volumes of this series will not need any introduction to them. But for the sake of those who are not as yet acquainted with the chums, a few words of explanation may not come in amiss.

They all belonged to the same lively troop, but Ned Nestor and his shadow, Jimmy McGraw, were members of the Wolf Patrol, while Jack Bosworth, Frank Shaw and Teddy Green belonged to the patrol that proudly pointed to the head of an American black bear as its totem.

Ned Nestor had long been secretly in the employ of the United States Government, and had won considerable renown in carrying to a successful conclusion several difficult cases entrusted to his charge by the authorities in command of the Secret Service....