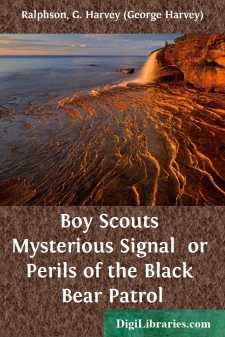 "But I say it's not fair!" cried a red-headed lad, drawing himself up to his full height. "You're not playing fair with us!"

"Ach, it is not so!" protested the one to whom the boy spoke. "We find you an enemy in our city, and you must take the consequences!"

"Just because you wear an officer's uniform," retorted the boy, beginning to lose his temper and gazing fearlessly into the pale blue eyes of the other, "is no sign you know more than we do. You may think that helmet and those stripes on your arm give you more brains than the common run of people, but it isn't so! I say I protest!"

"And much good your protest may do you at this time and place," was the calm answer. Then, drawing his eyebrows down until the blue eyes were scarcely able to peer beneath them, he continued: "I, Heinrich von Liebknecht, Captain in His Imperial Majesty's army in command of a detachment sent forward to capture this city, have decided that it is better that you remain with us. There is nothing more to say."

"But there is a great deal more to say!" stormed the boy.

"Jimmie," cautioned another lad, stepping forward and laying a hand on the arm of the red-headed boy, "perhaps it would be better to say no more just at this time. There must be some way out of this."

"Silence!" commanded the man who had called himself von Liebknecht. "The decision has been made. I leave you now, but will return in a few moments. By that time you will have said farewell to your friends and be ready to accompany me for service under the Kaiser!"

The lad addressed as Jimmie could scarcely restrain a sneer as the other finished speaking. His contempt was unbounded, and he did not seem to be making any great effort to conceal his emotion.

Just as the door was closing behind the departing man Jimmie permitted himself to wrinkle his freckled nose in that direction and accompanied the gesture with a motion indicative of great disgust and contempt well known to many.

The scene was one unusual in the extreme. Four young boys were standing in a room from which the ceiling had been partly removed by an exploding shell from a cannon. They were in one of the houses that had only partly escaped destruction during the bombardment of Peremysl by the Germans on that memorable first day of June, 1915.

Three of the boys were about eighteen years of age and wore the well-known uniforms of the Boy Scouts of America. The eldest, Ned Nestor, was slightly older than the others and wore insignia that denoted his rank as patrol leader of the Wolf Patrol, New York City.

Jack Bosworth and Harry Stevens stood beside Ned, their uniforms slightly the worse for wear, due to the extremely active experiences they had just undergone. These boys were members of the Black Bear Patrol of New York City, and were fast friends of Ned Nestor and his red-headed chum, Jimmie McGraw, the fourth member of the group.

Just now Jimmie was not wearing the Boy Scout uniform. Instead he was dressed in the uniform of a Russian Cossack, and this was the immediate reason for the controversy that had arisen between the boy and the German officer....