Boy Scouts in the Philippines Or, The Key to the Treaty Box 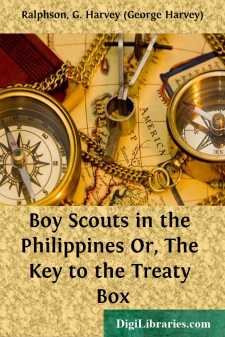 Frank Shaw, passenger on the United States army transport Union, San Francisco to the Philippines, awoke in his cabin to find the freckled face of Jimmie McGraw grinning above him.

"What's the use?" he demanded, sleepily and impatiently. "It will be only another roasting day on a hot deck on an ocean fit to stew fish in. What's the use of getting up? I'm going to sleep again."

Frank's intentions were all right, but he did not go to sleep again. As he turned over and closed his eyes, Jimmie seized him deftly by the shoulders and dumped him out on the scarlet rug which covered the floor of the stateroom.

Frank was seventeen and Jimmie was younger, and so there was a mixture of legs and arms and vocabulary for a moment, at the end of which Jimmie broke away and made for the door, which he had thoughtfully left open as a means of retreat.

Left thus alone on the tumbled blankets of the bunk from which he had been hustled, Frank rubbed his eyes, threw a pillow at his tormentor, and began making his way toward his cozy nest, much to Jimmie's disgust.

"Aw, come on!" the boy urged, still standing in a safe place by the doorway. "It's hot enough to melt brass in here, an' the siren's been shoutin' for half an hour! That means land—the Philippines! Perhaps you think you're lookin' for Battery Park, in little old New York! Get up an' look out of the port, over the rollin' sea, to the land of the little brown men!"

Looking through the doorway, over the boy's shoulders, Frank smiled serenely at what he saw and sat waiting for something to happen. Then Jimmie was propelled headlong into the room, where he landed squarely on top of the drowsy boy he had dragged out of bed. There was another scramble for points, and then two boys of about seventeen showed their faces in the doorway, laughing at the mix-up on the floor.

The transport's siren broke out again in its long, shrill greeting of the land which lay above the rim of the sea, and Frank, catapulting Jimmie against the wall at the back of the bunk, hastened to the open port and looked out.

The boys who had entered the cabin so unceremoniously were Ned Nestor and Jack Bosworth, who were traveling with Frank and Jimmie to the Philippines, the party being under the direction of Major John Ross, of the United States Secret Service.

They had left Panama about the middle of April, and it was now not far from the first of June, the transport having been delayed for a week at Honolulu, where she had put in for supplies. The boys had enjoyed the trip hugely, but were, nevertheless, not displeased at the sight of land.

Leave it to the lads themselves, and this was a Boy Scout expedition, although there was a serious purpose behind it. Ned Nestor and Jimmie McGraw were members of the Wolf Patrol, Ned being the Patrol Leader, while Frank Shaw and Jack Bosworth were members of the famous Black Bear Patrol, both of the city of New York.

Those who have read the first two books of this series will readily understand the object of this journey to the Philippines, but for the information of those who have not read the books it may be well to state here that while in Mexico and the Canal Zone Ned Nestor had been able to render valuable services to the United States government....