Boy Scouts in the North Sea The Mystery of a Sub 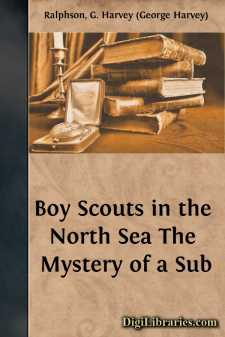 CHAPTER I A PACKAGE VANISHES

“Good night!” exclaimed a lad of about eighteen peering from the window in a railway coach. “This train’s running on a regular lake!”

“What’s that, Jimmie?” asked a companion approaching the first speaker. “Are we on a ferry? I still feel the wheels hit the rail joints.”

“Oh, yes, now and again we crawl along a rail’s length or two,” admitted the boy, “but it’s mighty slow work! I’m getting tired!”

“What place is this, anyway?” inquired a third boy coming to the window. “It looks as if we’re going out into the ocean!”

“We can’t be headed for Holland at this rate!”

“We surely are!” assured the one addressed as Jimmie. “I’ll bet I can tell you what that is! The Belgians cut their dikes and flooded the country to drive out the Germans. My dream book says that’s it!”

A general laugh greeted this assertion. Moving about in the limits of the none too commodious compartment of a European railway carriage four boys dressed in the well-known khaki uniforms of the Boy Scouts of America endeavored to observe the scenery through the windows.

To those of our readers who have followed the adventures of this group of boys as related in the previous volumes of this series no introduction is necessary. However, for the benefit of those who have not been so fortunate, a word of explanation may not be out of place at this time. The lads had very recently been engaged in a man hunt that led through parts of France and Belgium. They had visited the trenches of both the French and German forces and had several times faced death.

Just now they were practically prisoners, having been accorded passage from the German lines to a neutral port in Holland, where they expected to take ship for their home town of New York.

Ned Nestor, a fine, manly lad, was the Leader of the Wolf Patrol of New York City, Boy Scouts of America. He had been often selected for difficult work by the Chief of the United States Secret Service because of his aptitude for the work. His coolness and sound judgment had carried himself and his companions through many difficulties. It was a mission of this character upon which the boys had recently engaged and from which they were now returning.

Jimmie McGraw, freckle-faced and red-headed, was a member of the Wolf Patrol of which Ned was leader. He was an ardent adherent of Ned’s. Brought up a newsboy on the Bowery of New York the boy had come under the observation of the older lad, who had found him indeed worthy of all the care which had been bestowed.

Jack Bosworth, the son of a prominent corporation attorney, and Harry Stevens, whose father was a well-known automobile manufacturer, were the other members of the group. These latter two were members of the Black Bear Patrol of New York. All the lads appeared to be about eighteen years old. Their tidy uniforms, their well-knit frames and their alert attitudes bespoke the constant training of their leader.

As they looked from the windows of the car in which they now found themselves they discovered that the situation was even as Jimmie had stated....