Boy Scouts in the Canal Zone The Plot Against Uncle Sam 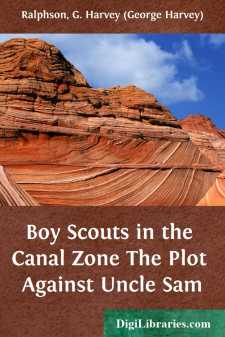 CHAPTER I THE PLOT AGAINST THE GATUN DAM.

“Five Black Bears, two Wolves, and a Panther. That would be a choice collection of wild animals to take to the Canal Zone.”

The remark was greeted with shouts of laughter, and then the boys in the handsome clubroom of the Black Bear Patrol, in the city of New York, settled down to a serious discussion of the topic of the evening. There were seven present, Ned Nestor and Jimmie McGraw, of the Wolf Patrol; George Tolford, Harry Stevens, Glen Howard, and Jack Bosworth, of the famous Black Bear Patrol; and Peter Fenton, of the Panther Patrol. They ranged in age from thirteen to seventeen, Jimmie being the youngest and Ned Nestor the oldest of the group.

They were all enthusiastic Boy Scouts, and their clubrooms were well supplied with boxing gloves, foils, and footballs, as well as weapons and articles necessary on camping expeditions. The clubroom in which the boys were assembled on this gusty night in early April was situated in the upper part of the fine residence of Jack’s father, on Fifth avenue. The Black Bear Patrol was composed almost entirely of the sons of very wealthy parents, and the boys were off to the woods and waters whenever opportunity offered.

In company with Lieutenant Gordon, of the United States Secret Service, and Frank Shaw, a member of the Black Bear Patrol, whose arrival was momentarily expected, the boys present had, on the previous day, returned from a series of unusual and exciting experiences in Mexico, and now they were discussing a proposed plan for an excursion to the Canal Zone. Of course they could make the trip if they desired, but what they wanted was to go in the company of Lieutenant Gordon, sent there on a secret mission by the Secretary of War.

“Aw, come on, Ned, an’ be a good feller,” Jimmie McGraw urged, as Nestor expressed a doubt as to the advisability of taking the boys on the Canal Zone trip, to which he had been invited by the lieutenant, both as assistant and companion. “Let us go! We’ll talk the lieutenant into letting us go along if you’ll say a good word for us.”

During the trip to Mexico to which reference has been made, Ned Nestor had succeeded in averting serious complications between the government of that rebellious republic and the government of the United States. Through his efforts a threatened raid across the Rio Grande from the Mexican side had been checked on the very border, and the secret service men associated with him did not hesitate to declare that his tact and activity had done much to prevent a war between the two countries.

Before leaving the scene of their operations in Mexico, Lieutenant Gordon had been ordered to New York on important official business. Only an inkling of what that official business was contained in his letter of instructions. Only the bare fact that complications in the Canal Zone were placing the Panama Canal in danger was conveyed to him. Later, after his arrival in New York, he had learned that the government suspected plots to destroy the great Gatun dam by the use of explosives....