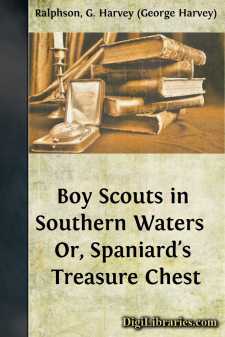 CHAPTER I A COLLISION IN THE FOG

"That must be the ninth wave."

"What do you mean by the ninth wave, Jack?"

"No, can't say that I ever knew that," replied Arnold Poysor leaning out of the pilot house of a sturdy motor boat plowing her way through the waters of that part of the Gulf of Mexico known as Mississippi Sound. "But I do know," he continued, "that if the Fortuna takes many more green ones over her bow, we'll have to get something other than oilskins to keep us dry!"

"Gee, I wish this fog would lift and let us find out where we are!" put in a third member of the part. "This is fierce!"

"It's thicker than the mush we used to get in that South Water Street restaurant when we were fitting out in Chicago!" declared the first speaker. "That was a bum place to eat!"

"Never mind the eats!" replied the one addressed as "Jack." "Just you keep that Klaxon going. You know we're on government waters here and the pilot rules require us to keep a fog signal sounding once every minute. We had hard enough work to convince the United States Inspectors that the Klaxon would make a perfectly good fog signal. Let's not fall down now on the job of keeping it going."

"So would we all!" declared the first speaker.

Four boys were standing in the pilot house of a sturdily built and splendidly equipped motor boat that was being rolled and tossed by the, waves driven from the Gulf of Mexico before a southerly wind. Great banks of fog were rolling inland before the wind--fog so thick it was scarcely possible to see a boat's length ahead.

The boys were all dressed in suits of oil skins under which might have been seen neat khaki Boy Scout Uniforms. If their jackets had been exposed one might have distinguished medals that betokened membership in the Beaver Patrol, Boy Scouts of America. Other insignia indicated to the initiated that the boys had won distinction and were entitled to the honors in Seamanship, Life Saving, Stalking and Signaling. On the jacket of the one addressed as "Jack" were insignia that betokened his rank as Scout Master and also as Star Scout. These had been won by sheer merit.

All four were manly young fellows of about seventeen and, though young, their faces gave evidence of alert natures thoroughly reliable and ready for any emergency.

Their vessel, the Fortuna, appeared fully equal to any task that might be expected of her. Trimly built and graceful, yet solidly and staunchly constructed, she rode the waves like a thing of life. Her engines, which by common consent had been reduced to half speed in deference to the law, worked perfectly, driving the powerful hull through the water easily. Just now she met the oncoming waves, driving into them with a good deal of spray about the bows.

Jack Stanley, Scout Master of the Beaver Patrol of Chicago, Boy Scouts of America, was Captain of the Fortuna. His father was president of a bank in Chicago and had requested Jack and his chums to take the Fortuna from Chicago to Southern waters where they would later on be joined by the banker for a cruise among the islands and points of interest in that vicinity. Jack was a fine, manly lad who well deserved the honors bestowed upon him. His companions were equally clean and worthy young boys who were members of the Beaver Patrol and who all were devoted to Jack.

Harry Harvey, an orphan, worked as messenger for one of the large telegraph companies....