Boy Scouts in Mexico; or on Guard with Uncle Sam 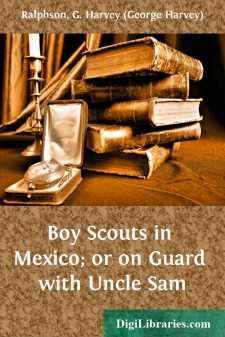 "After all, it is what's in a fellow's head, and not what's in his pocket, that counts in the long run."

"That's true enough! At least it proved so in our case. That time in the South we had nothing worth mentioning in our pockets, and yet we had the time of our lives."

"I don't think you ever told us about that."

"That was the time we went broke at Nashville, Tennessee. We missed our checks, in some unaccountable way, yet we had our heads with us, and we rode the Cumberland and Ohio rivers down to the Mississippi at Cairo, in a houseboat of our own construction."

The speaker, George Fremont, a slender boy of seventeen, with spirited black eyes and a resolute face, sat back in his chair and laughed at the memory of that impecunious time, while the others gathered closer about him.

Fremont was ostensibly in the employ of James Cameron, the wealthy speculator, but was regarded by that worthy gentleman as an adopted son rather than merely as a worker in his office force. Seven years before, Mr. Cameron had become interested in the bright-faced newsboy, and had taken him into his own home, where he had since been treated as a member of the family.

"Went broke in the South, did you?" asked one of the group gathered before an open grate fire in the luxuriously furnished clubroom of the Black Bear Patrol, in the upper portion of a handsome uptown residence, in the city of New York. "Go on and tell us about it! What's the matter with the Tennessee river, or the Rio Grande?"

"If you had no money, how did you get your houseboat?" asked another member of the group. "Houseboats don't grow on bushes down there, do they?"

"Oh, we had a little money," George Fremont replied, "but not enough to take us to Chicago in Pullman coaches. The joint purse was somewhere about $10. We built the houseboat ourselves, of course."

"Must have been a strange experience, going broke like that!" one of the others said. "Hurry up and tell us about it! I believe it does a fellow good, once in a while, to get where he's got to hustle for himself or go hungry!" he added, glancing at the others for appreciation of the sentiment.

"I suppose it does seem funny for some other fellow to be broke in a desolate land," said another voice, "but it isn't so funny right there on the spot. Little Old New York looked a long way off when we were in Nashville!"

The speaker, a boy of sixteen, short, and heavily built, left a window from which he had been looking out on a wild March night and joined the group before the fire. This was Frank Shaw, familiarly known to his friends of the Black Bear Patrol, Boy Scouts of America, as "Fatty" Shaw. He was the only son of a wealthy newspaper owner of the big city, and in training to succeed his father in the editorial chair.

"So, 'Fatty' was there!" exclaimed one of the group. "How did you ever get him into a houseboat? Must have been a big one!"

"Yes, Frank was there," Fremont replied, with a friendly glance at young Shaw. "His father sent him along to report the expedition."