Boy Scouts in an Airship; or, the Warning from the Sky 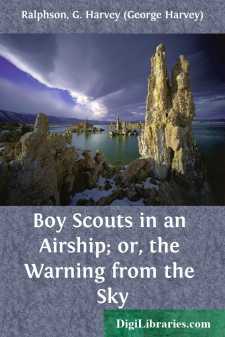 CHAPTER I SPIES IN THE BOY SCOUT CAMP

Gates, the United States Secret Service man, closed the door gently and remained standing just inside the room, his head bent forward in a listening attitude. Ned Nestor and Jimmie McGraw, Boy Scouts of the Wolf Patrol, New York City, who had been standing by a window, looking out on a crowded San Francisco street, previous to the sudden appearance of the Secret Service man, turned toward the entrance with smiles on their faces.

They evidently thought that Gates was posing, as so many detectives have a silly habit of doing, and so gave little heed to the hand he lifted in warning. The boys knew little about Gates at that time, and so may be pardoned for the uncomplimentary thoughts with which they noted his theatrical conduct.

Young Nestor had been engaged by the United States government to undertake a difficult and dangerous mission to South America, and Gates had been sent on from Washington to post him as to the details of the case. The boys had waited at the San Francisco hotel three days for the arrival of the Secret Service man, and waited impatiently, as Sam Leroy, who was to be the third member of the party, was anxious for the safety of his aeroplane, the Nelson, in which the trip to "the roof of the world" was to be made.

The Nelson was lying, guarded night, and day, in a field just out of the city, on the Pacific side, and Leroy was impatiently keeping his eyes on the guards most of the time. There was a subconscious notion in the minds of all the boys that there were enemies about, and that the aeroplane would never be fully out of danger until she was well over the ocean on her way south. Gates had arrived only that morning, and now the lads were eager to be off.

A couple of hours before his appearance in the room that morning, the Secret Service agent had left the boys in the lobby below to arrange for the necessary papers and funds for the mission. Before going out, however, he had been informed of the boys' suspicions, and had made light of the idea that the aeroplane was in danger from secret enemies, pointing to the fact that no one was supposed to know anything about the proposed journey save the boys and himself as conclusive evidence that the suspicion of constant surveillance was not well founded.

Now, on his return, his cautious movements indicated that he, too, was alarmed and on his guard. While Ned was wondering what it was that had so changed Gates' point of view, there came a quick, imperative knock on the door of the room, which was occupied by Ned and Jimmie as a sleeping apartment.

Instantly, almost before the sound of the knock died away, Gates opened the door and stepped forward. The man who stood in the corridor, facing the doorway, was tall, slender, dark of complexion, like a Spaniard or a Mexican. His black hair was long, straight, thin; his black eyes were bright, treacherous, too close together, with a little vertical wrinkle between the brows. He was dressed in a neat brown business suit of expensive material....