Boy Scouts in a Submarine : or, Searching an Ocean Floor 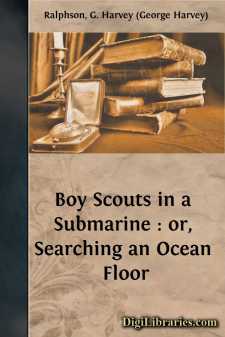 CHAPTER I LOST ON AN OCEAN FLOOR

The handsome clubroom of the Black Bear Patrol, Boy Scouts of America, in the City of New York, was ablaze with light, and as noisy as healthy, happy boys could well make it.

"Over in the Chinese Sea!" shouted Jimmie McGraw from a table which stood by an open window overlooking the brilliantly illuminated city. "Do we go to the washee-washee land this time?"

"Only to the tub!" Jack Bosworth put in.

"What's the answer?" asked Frank Shaw, sitting down on the edge of the table and rumpling Jimmie's red hair with both hands.

Jimmie broke away and, after bouncing a football off his tormentor's back, perched himself on the back of a great easy chair.

"The answer?" Jack said, after peace had been in a measure restored, "I thought everybody knew that the Chinks wash their clothes in the Gulf of Tong King and hang them out to dry on the mountains of Kwang Tung! Are we going there, Ned?" he added, turning to Ned Nestor, who sat by a nearby window, looking out over the city. "Are we going to the gulf of Tong King?"

Ned left his chair by the window and walked over to the table.

"I hardly know," he said, taking a roll of maps and drawings from his breast pocket and spreading them out on the table. "When Captain Moore arrives we shall know more about it."

This from Jimmie, still sitting on the back of the chair, elbows on knees, chin on palms.

"Is he going to be the big noise?"

This from Jack Bosworth, who was reaching out with his foot in a vain effort to tip Jimmie's chair and send him sprawling.

"Is Captain Moore going with us?"

This question was asked by Frank Shaw with a show of anxiety. When out on their trips the Boy Scouts did not relish having older men about to show authority.

"One question at a time!" laughed Ned. "To answer the first query first, Captain Moore is the Secret Service officer who is to post us with regard to our mission to Chinese waters. Second he will, to use the slang adopted by Jack, be the 'Big Noise' as long as he is with us. Third, I don't know whether he is going on the journey with us or not."

"He'll want us to sit in baby chairs at tables and object to our takin' moonlight walks on the bottom of the sea! Is he covered all over with brass buttons, an' does he strut like this?"

Jimmie bounded to the floor and walked up and down the room with a mock military stride which set his companions into roars of laughter.

"I have never seen him," Ned replied. "He is coming here tonight, and you must judge for yourself what kind of a man he is."

"Here?" asked Frank. "Here to this club-room? The boys won't do a thing to him if he puts on dog!"

"Is he a submarine expert?" asked Frank.

"I don't believe he knows any more about a submarine, right now, than Ned does," Jimmie exclaimed. "Ned's been taking walks on the bottom of the Bay every mornin' for a week!"

Jack and Frank turned to Ned with amazement showing on their faces....