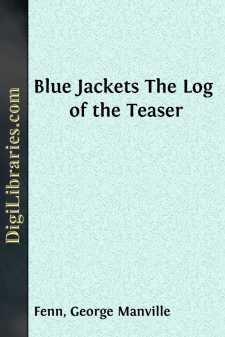 We three lads, midshipmen on board HM clipper gunboat the Teaser, did “tumble over”—in other words, made our way down into the boat alongside—but not so quickly that the first lieutenant, Mr Reardon, who, from his slightly Hibernian pronunciation of the word discipline and constant references thereto had earned for himself among us the sobriquet of “Dishy,” did catch sight of us, come to the gangway and look down just as Double B had given the order to shove off, and was settling the strap of the large telescope he carried over his shoulder. I ought to tell you our names, though, in order of seniority; and it will make matters more easy in this log if I add our second handles or nicknames, for it was a habit among us that if a fellow could by any possibility be furnished with an alias, that furnishing took place.

For instance, Bruce Barkins always went by the name of “Double B,” when, in allusion to the Bark in his family name, he was not called the “Little Tanner,” or “Tanner” alone; Harry Smith, being a swarthy, dark-haired fellow, was “Blacksmith;” and I, Nathaniel Herrick, was dubbed the first day “Poet”—I, who had never made a line in my life—and later on, as I was rather diminutive, the “Gnat.”

One can’t start fair upon any voyage without preparations, so I must put in another word or two to tell you that there were two logs kept on board the good ship Teaser—one by the chief officer, and in which the captain often put down his opinion. This is not that, but my own private log; and I’m afraid that if the skipper or Lieutenant Reardon had ever seen it he would have had a few words of a sort to say to me—words which I would rather not have heard.

It was a gloriously fine morning. We had been dodging about the coast on and off for a month on the look-out for piratical junks and lorchas, had found none, and were now lying at anchor in the mouth of the Nyho river, opposite the busy city of that name. Lastly, we three had leave to go ashore for the day, and were just off when the first lieutenant came and stood in the gangway, just as I have said, and the Tanner had told the coxswain to shove off.

“Stop!” cried our tyrant loudly; and the oars which were being dropped into the pea-soupy water were tossed up again and held in a row.

“Eh?” cried the first lieutenant sharply. “What say?” and he looked hard at me.

“Oh, I thought you did. Well, young gentlemen, you are going ashore for the day. Not by my wish, I can assure you.”

“No, sir,” said Smith, and he received a furious look.

“Was that meant for impertinence, sir?”

“Oh, I’m very glad it was not. I was saying it was not by my wish that you are going ashore, for I think you would be all better employed in your cabin studying navigation.”

“Haven’t had a holiday for months, sir,” said Barkins, in a tone of remonstrance....