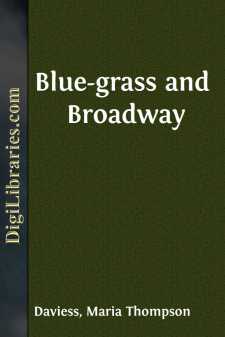 The need of a large sum of money in a great hurry is the root of many noble ambitions, in whose branches roost strange companies of birds, pecking away for dollars that grow—or do not—on bushes. And it was in such a quest that Miss Patricia Adair of Adairville, Kentucky, lit upon a limb of life beside Mr. Godfrey Vandeford of Broadway, New York. Their joint endeavors made a great adventure.

"There's nothing to it, Pop; either pony girls will have to grow four legs to cut new capers, somebody will have to write a play entitled 'When Courtship Was in Flower,' requiring flowered skirts ten yards wide with a punch in each furbelow, or we go out of the theatrical business," said Mr. Vandeford, as he shuffled a faint, violet-tinted letter out of a pile of advertising posters emblazoned with dancing girls and men, several personal bills, two from a theatrical storage house and one from an electrical expert, leaned back in his chair, and prepared to open the violet communication. "We dropped twenty thousand cool on 'Miss Cut-up,' and those sixteen pairs of legs cost us fifteen hundred a week. We might be in danger of starving right here on Broadway, if we hadn't picked a sure-fire hit in 'The Rosie Posie Girl.'"

"Ain't it the truth," answered Mr. Adolph Meyers, as he glanced up from his typewriter with a twinkle in his big black eyes that were like gems in a round, very sedate, even sad, Hebrew face. "Bare legs and 'cut-ups' is already old now, Mr. Vandeford. It is that we must have now a play with a punch."

"The law won't let us take anything more off the chorus, so we'll have to swing back and put a lot on. Costumes that cost a million will be the next drag, mark me, Pop," Mr. Godfrey Vandeford declaimed with a gloomy brow, as he still further delayed exploring the violet missive.

"A hundred thousand it will take for costuming 'The Rosie Posie Girl,'" agreed Pop dolefully, from above the letter he was slowly pecking out of the machine.

"For furnishing chiffon belts, you mean, not costumes, if we go by Corbett's clothes ideas," growled the pessimistic, prospective producer of the possible next season's hit in the girl-show line.

"You have it right," answered Pop, sympathetically.

"If I hadn't promised to let old Denny in on my Violet Hawtry show for the fall I'd be tempted to throw back everything, even 'The Rosie Posie Girl' and go gunning for potatoes or onions up on a Connecticut farm; but the show bug has bit Denny hard and I'll have to be the one to shear him and not leave it to any of the others. I'll be more merciful to his millions; but asking him to put up half of a cool hundred and fifty thousand is a bit raw. Wish I had a nice little glad play with an under twenty cast for him to cut his teeth on instead of the 'Rosie Posie.'"

"It's six plays on the shelf now for reading," reminded Mr. Meyers, eagerly, for to him fell the task of weeding all plays sent into the office of Godfrey Vandeford, Theatrical Producer, and his optimistic soul suffered when he discovered a gem and found himself unable to get Mr. Vandeford to read so much as the first act unless he caught him in just such a mood as the one in which he now labored. "Now, I want that you take just a peep, Mr. Vandeford, at that new Hinkle comedy for which I have written already five times to delay—"

"Can't do it now, Pop! Don't you see that I have got to read this purple letter and that is all the business I can attend to for this morning?" answered Mr....