Blown to Bits or, The Lonely Man of Rakata 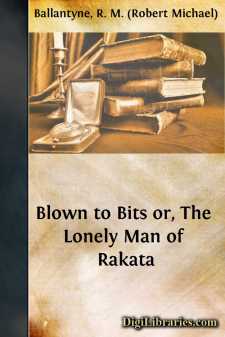 Blown to bits; bits so inconceivably, so ineffably, so "microscopically" small that—but let us not anticipate.

About the darkest hour of a very dark night, in the year 1883, a large brig lay becalmed on the Indian Ocean, not far from that region of the Eastern world which is associated in some minds with spices, volcanoes, coffee, and piratical junks, namely, the Malay Archipelago.

Two men slowly paced the brig's quarter-deck for some time in silence, as if the elemental quietude which prevailed above and below had infected them. Both men were broad, and apparently strong. One of them was tall; the other short. More than this the feeble light of the binnacle-lamp failed to reveal.

"Father," said the tall man to the short one, "I do like to hear the gentle pattering of the reef points on the sails; it is so suggestive of peace and rest. Doesn't it strike you so?"

"Can't say it does, lad," replied the short man, in a voice which, naturally mellow and hearty, had been rendered nautically harsh and gruff by years of persistent roaring in the teeth of wind and weather. "More suggestive to me of lost time and lee-way."

The son laughed lightly, a pleasant, kindly, soft laugh, in keeping with the scene and hour.

"Why, father," he resumed after a brief pause, "you are so sternly practical that you drive all the sentiment out of a fellow. I had almost risen to the regions of poetry just now, under the pleasant influences of nature."

"Glad I got hold of 'ee, lad, before you rose," growled the captain of the brig—for such the short man was. "When a young fellow like you gets up into the clouds o' poetry, he's like a man in a balloon—scarce knows how he got there; doesn't know very well how he's to get down, an' has no more idea where he's goin' to, or what he's drivin' at, than the man in the moon. Take my advice, lad, an' get out o' poetical regions as fast as ye can. It don't suit a young fellow who has got to do duty as first mate of his father's brig and push his way in the world as a seaman. When I sent you to school an' made you a far better scholar than myself, I had no notion they was goin' to teach you poetry."

The captain delivered the last word with an emphasis which was meant to convey the idea of profound but not ill-natured scorn.

"Why, father," returned the young man, in a tone which plainly told of a gleeful laugh within him, which was as yet restrained, "it was not school that put poetry into me—if indeed there be any in me at all."

"It was mother," returned the youth, promptly, "and surely you don't object to poetry in her."

"Object!" cried the captain, as though speaking in the teeth of a Nor'wester. "Of course not. But then, Nigel, poetry in your mother is poetry, an' she can do it, lad—screeds of it—equal to anything that Dibdin, or, or,—that other fellow, you know, I forget his name—ever put pen to—why, your mother is herself a poem! neatly made up, rounded off at the corners, French-polished and all shipshape....