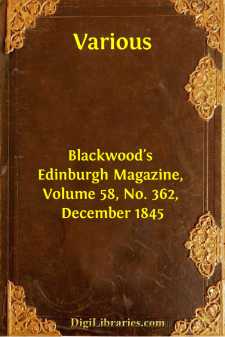 It might have been expected, that after the march into Bavaria had demonstrated the military genius of the Duke of Marlborough, and the battle of Blenheim had in so decisive a manner broken the enemy's power, the principal direction of military affairs would have been entrusted to that consummate commander; and that the Allied cabinets, without presuming to interfere in the management of the campaigns, would have turned all their efforts to place at his disposal forces adequate to carry into execution the mighty designs which he meditated, and had shown himself so well qualified to carry into execution. It was quite the reverse. The Allied cabinets did nothing. They did worse than nothing—they interfered only to do mischief. Their principal object after this appeared to be to cramp the efforts of this great general, to overrule his bold designs, to tie down his aspiring genius. Each looked only to his own separate objects, and nothing could make them see that they were to be gained only by promoting the general objects of the alliance. Relieved from the danger of instant subjugation by the victory of Blenheim, and the retreat of the French army across the Rhine, the German powers relapsed into their usual state of supineness, lukewarmness, and indifference. No efforts of Marlborough could induce the Dutch either to enlarge their contingent, or even render that already in the field fit for active service. The English force was not half of what the national strength was capable of sending forth. Parliament would not hear of any thing like an adequate expenditure. Thus the golden opportunity, never likely to be regained, of profiting by the consternation of the enemy after the battle of Blenheim, and their weakness after forty thousand of their best troops had been lost to their armies, was allowed to pass away; and the war was permitted to dwindle into one of posts and sieges, when, by a vigorous effort, it might have been concluded in the next campaign.

It was not thus with the French. The same cause which had loosened the efforts of the confederates, had inspired unwonted vigour into their councils. The Rhine was crossed by the Allies; the French armies had been hurled with disgrace out of Germany; the territory of the Grand Monarque was threatened both from the side of Alsace and Flanders; and a formidable insurrection in the Cevennes both distracted the force and threatened the peace of the kingdom. But against all these evils Louis made head. Never had the superior vigour and perseverance of a monarchy over that of a confederacy been more clearly evinced. Marshal Villars had been employed in the close of the preceding year to appease the insurrection in the Cevennes, and his measures were at once so vigorous and conciliatory, that before the end of the following winter the disturbances were entirely appeased. In consequence of this, the forces employed in that quarter became disposable; and by this means, and the immense efforts made by the government over the whole kingdom, the armies on the frontier were so considerably augmented, that Villeroi and the Elector of Bavaria took the field in the Low Countries at the head of seventy-five thousand men, while Marshal Marsin on the Upper Rhine, covered Alsace with thirty thousand. Those armies were much larger than any which the Allies could bring against them; for although it had been calculated that Marlborough was to be at the head of ninety thousand men on the Moselle on the 1st May, yet such had been the dilatory conduct of the States-general and the German princes, that in the beginning of June there were scarcely thirty thousand men collected round his standards; and in Flanders and on the Upper Rhine the enemy's relative superiority was still greater.

The plan of the campaign of 1705, based on the supposition that these great forces were to be at his disposal, concerted between him and Prince Eugene, was in the highest degree bold and decisive. It was fixed that, early in spring, ninety thousand men should be assembled in the country between the Moselle and the Saar, and, after establishing their magazines and base of operations at Treves and Traerbach, they should penetrate, in two columns into Lorraine; that the column under Marlborough in person should advance along the course of Moselle, and the other, under the Margrave of Baden, by the valley of the Saar, and that Saar-Louis should be invested before the French army had time to take the field. In this way the whole fortresses of Flanders would be avoided, and the war, carried into the enemy's territory, would assail France on the side where her iron barrier was most easily pierced through. But the slowness of the Dutch, and backwardness of the Germans, rendered this well-conceived plan abortive, and doomed the English general, for the whole of a campaign which promised such important advantages, to little else but difficulty, delay, and vexation. Marlborough's enthusiasm, great as it was, nearly sank under the repeated disappointments which he experienced at this juncture; and, guarded as he was, it exhaled in several bitter complaints in his confidential correspondence. But, like a true patriot and man of perseverance, he did not give way to despair when he found nearly all that had been promised him awanting; but perceiving the greater designs impracticable, from the want of all the means by which they could be carried into execution, prepared to make the most of the diminutive force which alone was at his disposal....