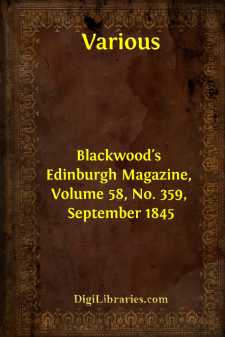 The appearance of the second edition of Leslie's Life of Constable invites attention to this truly English and original artist. We have read this volume with much interest. It is a graceful homage paid by a great living painter to the memory of one who is no more: a kindly, and, as we believe, an honest testimony to the moral and professional worth of one whose works stand out with a striking and distinct character in the English school of landscape-painting, and which, we are confident, will retain the place which they have slowly gained in public estimation, as long as a feeling of pictorial truth, in its more elevated sense, and as distinct from a mere literal imitation of details, shall continue to endure. Mr Leslie has accomplished his task with skill as well as good sense; for, keeping the labours of the editor entirely in the background, he has made Constable his own biographer—the work consisting almost entirely of extracts from his notes, journals, and correspondence, linked together by the slenderest thread of narrative. Story indeed, it may be said, there was none to tell; for, among the proverbially uneventful lives of artists, that of Constable was perhaps the least eventful. His birth—his adoption of painting as a profession (for he was originally destined pulverem collegisse in the drier duties of a miller)—his marriage, after a long attachment, on which parents had looked frowningly, but which the lovers, by patient endurance and confidence in each other, brought to a successful issue—his death, just when he had begun to feel that the truth and originality of his style were becoming better appreciated both abroad and at home; these, with the hopes, and fears, and anxieties for a rising family, which diversify the married life with alternate joys and sorrows, form, in truth, the only incidents in his history. The incidents of a painter's life, in fact, are the foundation of his character, the gradual development to his own mind of the principles of his art; and with Constable's thoughts and opinions, his habits of study, the growth of his style—if that term can be applied to the manner of one whose great anxiety it was to have no distinguishable style whatever—with his manly, frank, affectionate, and somewhat hasty disposition, with his strong self-reliance, and, as we may sometimes think, his overweening self-esteem—his strength of mind and his weaknesses—this volume makes us familiarly acquainted.

Constable was born in 1776, at East Bergholt in Sussex. His father was in comfortable circumstances, as may be gathered from the fact, that the artist (one of six children) ultimately inherited £4000 as his share of the succession. He was thus entirely exempted from the res angusta with which artists have so often to labour; although, with the characteristic improvidence of his profession, we still find that he had enough to do to make both ends meet. Born delicate, he grew up a strong and healthy boy, and was intended by his father, who had succeeded by purchase or inheritance to sundry wind and water mills, for a miller....