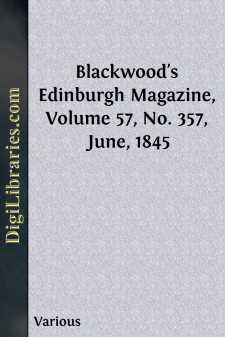 PÚSHKIN, THE RUSSIAN POET. No. I. Sketch of Púshkin's Life and Works, by Thomas B. Shaw, B.A. of Cambridge, Adjunct Professor of English Literature in the Imperial Alexander Lyceum, Translator of "The Heretic," &c. &c.

Among the many striking analogies which exist between the physical and intellectual creations, and exhibit the uniform method adopted by Supreme Wisdom in the production of what is most immortal and most precious in the world of thought, as well as of what is most useful and beautiful in the world of matter, there is one which cannot fail to arise before the most actual and commonplace imagination. This is, the great apparent care exhibited by nature in the preparation of the nidus—or matrix, if we may so style it—in which the genius of the great man is to be perfected and elaborated. Nature creates nothing in sport; and as much foresight—possibly even more—is displayed in the often complicated and intricate machinery of concurrent causes which prepare the development of great literary genius, as in the elaborate in-foldings which protect from injury the germ of the future oak, or the deep-laid and mysterious bed, and the unimaginable ages of growth and hardening, necessary to the water of the diamond, or to the purity of the gold.

Púshkin is undoubtedly one of that small number of names, which have become incorporated and identified with the literature of their country; at once the type and the expression of that country's nationality—one of that small but illustrious bard, whose writings have become part of the very household language of their native land—whose lightest words may be incessantly heard from the lips of all classes; and whose expressions may be said, like those of Shakspeare, of Molière, and of Cervantes, to have become the natural forms embodying the ideas which they have expressed, and in expressing, consecrated. In a word, Púshkin is undeniably and essentially the great national poet of Russia.

In tracing, therefore, this author's double existence, and in essaying to give some account of his external as well as his interior life—in sketching the poet and the man—we cannot fail to remark a striking exemplification of the principle to which we have alluded; and as we accompany, in respectful admiration, his short but brilliant career, we shall have incessant occasion to remember the laws which regulated its march—laws ever-acting and eternal, and no less apparent to the eye of enlightened criticism, than are the mighty physical influences which guide the planets in their course, to the abstract reason of the astronomer.

Alexander Púshkin was born (as if destiny had intended, in assigning his birth-place—the ancient capital of Russia, and still the dwelling-place of all that is most intense in Russian nationality—to predict all the stuff and groundwork of his character) at Moscow, on the 26th of May 1799. His family, by the paternal side, was one of the most ancient and distinguished in the empire, and was descended from Rátcha, a German—probably a Teutonic knight—who settled in Muscovy in the thirteenth century, and took service under Alexander Névskii, (1252-1262,) and who is the parent root from which spring many of the most illustrious houses in Russia—those of Púshkin, of ButurlÃ­n, of Kaménskii, and of Metelóff....