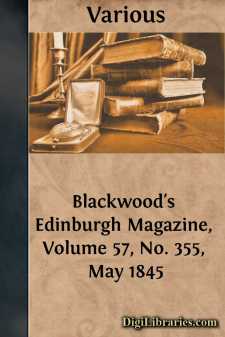 Never was there a juster observation, than that, in ordinary times, in the same state, genius moves in a circle; originality is lost amidst imitation; we breathe thought not less than vital air. This is more especially the case in all those branches of opinion or philosophy which relate to internal economy, or the social concerns of men. There, it is not merely abstract principle, or disinterested reasoning, which have struck their roots into the human mind; interest, prejudice, passion, have moved it yet more deeply, and rendered the change from one set of opinions to another still more difficult. Universally it will be found, that in regard to the social concerns of men, which are so closely interwoven with our habits, interests, and affections, the transition from error to truth can rarely be accomplished by any intellect, how powerful soever, which has not imbibed, in part at least, the maxims of foreign states. New ideas, like lightning, are produced by the blending of two streams of thought, wafted from different ages or parts of the world. The French political revolution was brought about by the meeting of new-born French fervour with long-established English ideas: the Anglomania which immediately preceded that convulsion is the proof of it. The English social revolution has proceeded from the same cause: it is the junction of British practical habits with French speculative views which has produced the political economy of modern times: and the whole doctrines of free-trade which Adam Smith matured, and recent times have reduced to practice, are to be found in the Physiocratie of Dupont de Nemours, and the political pamphlets of Turgot.

It was in the year 1775 that these doctrines, imported from France, were first broached in this country by the publication of the Wealth of Nations; and it took half a century for them to pass from the solitary meditation of the recluse into the cabinets of statesmen and the hustings of the populace. Now, however, this transformation of thought is general, at least in a considerable part of the mercantile and manufacturing portions of the community. Few in the great cities of the empire think of doubting the doctrines of free-trade: fewer still, if they doubt them, venture to give publicity to their opinions. The reason of this general concurrence among commercial men, and of this, in social matters, rapid conversion of general thought, is to be found in the circumstance, that the new opinions fell in with the interests, or at least the immediate interests, of the leaders and influential men among the mercantile classes. The remainder, not understanding the subject, yielded by degrees to what they were told, by their superiors in wealth and intelligence, were incontrovertible propositions. Manufacturers who enjoyed the advantages of coal, ironstone, canals, railroads, and harbours at their doors, very readily embraced the doctrine, that all restrictions on commercial intercourse were contrary to reason; and that all mankind, how destitute soever of these advantages themselves, could do nothing so wise as to admit all their goods without any protective duties whatever. Merchants widely engaged in mercantile speculations, who were buying and selling in all parts of the world, and whose interest it was to purchase as largely and as cheaply as possible, and to sell as extensively and as dearly as was consistent with that extent, had no difficulty in arriving at the conclusion, that commerce should be left perfectly free, that all protective duties for the shelter of native industry should be abolished, and that the only charges on the transport of goods should be the cost of transit and their own profits. Every shilling taken from the import duties was so much put in their pockets, either directly by their gaining the remitted duty, or by their indirectly feeling the benefit of it, in the reduction of price and the widening of the market. Capitalists and bankers, who had vast sums to lend, found nothing so reasonable as that they should be permitted, without restraint, to exact any amount of usury they chose from the necessities, the folly, or the cupidity of their debtors. The opinion became general, that a nation could only be made rich by the same means as an individual manufacturer, and that the excess of the price obtained for the produce of national labour above the cost of production, was the measure of national wealth.

Under the influence of these opinions, prohibitions, restrictions, and import duties gave way on all sides. To the huge mass of the ignorant vulgar, the very sound of "abolition of restrictions" was delightful. Restraint was what they hated, exclusive privilege was their abomination, liberty of thought and action their supposed elysium....