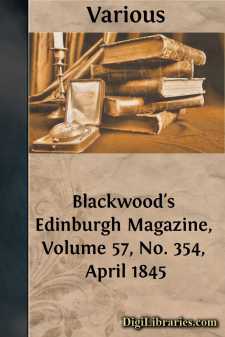 Originality of conception and fidelity of observation in general mark the efforts of genius in the earlier ages of society; and it is then, accordingly, that those creative minds appear which stamp their own impress upon the character of a whole people, and communicate to their literature, in the most distant periods, a certain train of thought, a certain class of images, a certain family resemblance. Homer, Phidias, and Æschylus in ancient times—Dante, Michael Angelo, Ariosto, and Shakspeare in modern, belong to this exalted class. Each in his own department has struck out a new range of thought, and created a fresh brood of ideas, which, on "winged words," have taken their flight to distant regions, and to the end of the world will never cease to delight and influence mankind. Subsequent ages may refine their images, expand their sentiments, perhaps improve their expression; but they add little to the stock of their conceptions. The very greatness of their predecessors precludes fresh creations: the furrows of the ancient wheels are so deep that the modern chariot cannot avoid falling into them. So completely in all persons of education are the great works of antiquity incorporated with thought, that they arise involuntarily with every exercise of the faculty of taste, and insensibly recur to the cultivated mind, with all that it admires, and loves, and venerates.

But though originality of conception, the creation of imagery, and the invention of events belong to early ages, delicacy of taste, refinement of sentiment, perfection of expression, are the growth of a more advanced period of society. The characters which are delineated by the hand of Genius in early times, are those bold and original ones in which the features are distinctly marked, the lines clearly drawn, the peculiarities strongly brought out. The images which are adopted are those which have first occurred to the creative mind in forming a world of fancy: the similes employed, those which convey to the simple and unlettered mind the clearest or most vivid conception of the idea or event intended to be illustrated. Valour, pride, resolution, tenderness, patriotism, are the mental qualities which are there portrayed in imaginary characters, and called forth by fictitious events: and it is this first and noblest delineation of mental qualities in an historical gallery which has rendered the Iliad immortal. The images and similes of Homer are drawn from a close observation of nature, but they are not very varied in their range: he paints every incident, every occurrence, every feature, but he is not much diversified in conception, and surprisingly identical in expression. His similes of a boar beset by hunters, of a lion prowling round a fold and repelled by the spear of the shepherd, of a panther leaping into a herd of cattle, are represented in the same words wherever he has a close fight of one of his heroes with a multitude of enemies to recount. So forcibly is the creative mind, in the first instance, fascinated by the variety and brilliancy of its conceptions, that it neglects and despises their subordinate details....