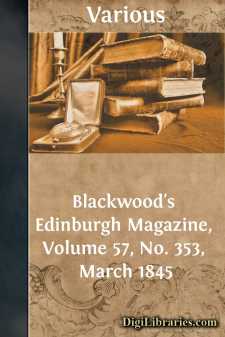 In 1821, as a contribution to a periodical work—in 1822, as a separate volume—appeared the "Confessions of an English Opium-Eater." The object of that work was to reveal something of the grandeur which belongs potentially to human dreams. Whatever may be the number of those in whom this faculty of dreaming splendidly can be supposed to lurk, there are not perhaps very many in whom it is developed. He whose talk is of oxen, will probably dream of oxen: and the condition of human life, which yokes so vast a majority to a daily experience incompatible with much elevation of thought, oftentimes neutralizes the tone of grandeur in the reproductive faculty of dreaming, even for those whose minds are populous with solemn imagery. Habitually to dream magnificently, a man must have a constitutional determination to reverie. This in the first place; and even this, where it exists strongly, is too much liable to disturbance from the gathering agitation of our present English life. Already, in this year 1845, what by the procession through fifty years of mighty revolutions amongst the kingdoms of the earth, what by the continual development of vast physical agencies—steam in all its applications, light getting under harness as a slave for man, powers from heaven descending upon education and accelerations of the press, powers from hell (as it might seem, but these also celestial) coming round upon artillery and the forces of destruction—the eye of the calmest observer is troubled; the brain is haunted as if by some jealousy of ghostly beings moving amongst us; and it becomes too evident that, unless this colossal pace of advance can be retarded, (a thing not to be expected,) or, which is happily more probable, can be met by counter-forces of corresponding magnitude, forces in the direction of religion or profound philosophy, that shall radiate centrifugally against this storm of life so perilously centripetal towards the vortex of the merely human, left to itself the natural tendency of so chaotic a tumult must be to evil; for some minds to lunacy, for others to a reagency of fleshly torpor. How much this fierce condition of eternal hurry, upon an arena too exclusively human in its interests, is likely to defeat the grandeur which is latent in all men, may be seen in the ordinary effect from living too constantly in varied company. The word dissipation, in one of its uses, expresses that effect; the action of thought and feeling is too much dissipated and squandered. To reconcentrate them into meditative habits, a necessity is felt by all observing persons for sometimes retiring from crowds. No man ever will unfold the capacities of his own intellect who does not at least chequer his life with solitude. How much solitude, so much power. Or, if not true in that rigour of expression, to this formula undoubtedly it is that the wise rule of life must approximate.

Among the powers in man which suffer by this too intense life of the social instincts, none suffers more than the power of dreaming. Let no man think this a trifle. The machinery for dreaming planted in the human brain was not planted for nothing. That faculty, in alliance with the mystery of darkness, is the one great tube through which man communicates with the shadowy. And the dreaming organ, in connexion with the heart, the eye, and the ear, compose the magnificent apparatus which forces the infinite into the chambers of a human brain, and throws dark reflections from eternities below all life upon the mirrors of the sleeping mind.

But if this faculty suffers from the decay of solitude, which is becoming a visionary idea in England, on the other hand, it is certain that some merely physical agencies can and do assist the faculty of dreaming almost preternaturally. Amongst these is intense exercise; to some extent at least, and for some persons: but beyond all others is opium, which indeed seems to possess a specific power in that direction; not merely for exalting the colours of dream-scenery, but for deepening its shadows; and, above all, for strengthening the sense of its fearful realities.

The Opium Confessions were written with some slight secondary purpose of exposing this specific power of opium upon the faculty of dreaming, but much more with the purpose of displaying the faculty itself; and the outline of the work travelled in this course. Supposing a reader acquainted with the true object of the Confessions as here stated, viz. the revelation of dreaming, to have put this question:—

"But how came you to dream more splendidly than others?"

Secondly, suppose him to say, "But how came you to take opium in this excess?"

The answer to that would be, "Because some early events in my life had left a weakness in one organ which required (or seemed to require) that stimulant."

Then, because the opium dreams could not always have been understood without a knowledge of these events, it became necessary to relate them. Now, these two questions and answers exhibit the law of the work, i.e. the principle which determined its form, but precisely in the inverse or regressive order. The work itself opened with the narration of my early adventures. These, in the natural order of succession, led to the opium as a resource for healing their consequences; and the opium as naturally led to the dreams. But in the synthetic order of presenting the facts, what stood last in the succession of development, stood first in the order of my purposes.

At the close of this little work, the reader was instructed to believe—and truly instructed—that I had mastered the tyranny of opium. The fact is, that twice I mastered it, and by efforts even more prodigious, in the second of these cases, than in the first. But one error I committed in both. I did not connect with the abstinence from opium—so trying to the fortitude under any circumstances—that enormity of exercise which (as I have since learned) is the one sole resource for making it endurable....