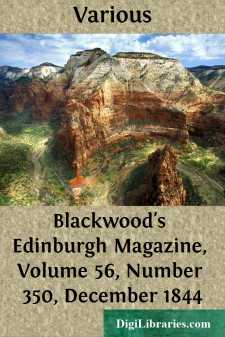 When any important branch of national polity has been impeached, arraigned, and brought to stand its trial before the bar of public opinion, it is satisfactory to know that the subject has been thoroughly investigated, since a searching investigation alone can excuse a verdict, be it of acquittal or of condemnation. That no man can be twice tried upon the same indictment, is a proud boast of the British constitution. It would be well if the same rule were always applied when mightier interests than those of individuals are at stake!

It is just eighteen years ago since a ministry, feeble in practice, but strong in speculative theory, ventured to put forth its hand against the monetary system of Scotland, under shelter of which the country had improved and thriven to a degree of prosperity never experienced to the north of the Tweed before, and at a ratio which far exceeded that of any other nation in Europe. In the short space of half a century, the whole face of the country had changed. From a bleak, barren, and dilapidated region—for such she undoubtedly was for many years subsequent to the last rebellion of 1745—Scotland became, with the shortest possible transition, a favourite land of husbandry. Mosses and muirs, which, at all events since the forgotten days of the Jameses, had borne no other crop than rugged bent or stubborn heather, were subjected to the discipline of the plough, and produced a golden harvest of grain. Woods sprang up as if by magic, from the roots of the old Caledonian forest, to hide the nakedness of the land and redeem the national reproach. The towns and boroughs—which had never recovered from the terrible blow inflicted upon them by the failure of the Darien scheme, in which nearly the whole capital of Scotland was embarked, and which had lost the greater and more valuable portion of their trade, and dwindled down into almost hopeless insignificancy—began to revive again. New manufactures were established, the older ones were extended; the fisheries rose immensely in magnitude and importance; the mountainous districts were made profitable by the breeding and export of sheep and cattle; and even the rugged shores of the Hebrides furnished for a time a most profitable article of commerce. All this took place in a poor and very neglected country. England for a long time knew little of what as going on in the north; perhaps her eyes were then riveted, with more than the anxiety of a gamester's, upon the great stakes for which she was contending on the red battle-fields of Europe. This much she knew, that Scotland could produce in time of need—ay, and did produce—levies of men, whose high heroic courage, steady discipline, and daring intrepidity, were the theme even of their enemies' admiration; and of these services she was, and is, justly and generously proud. But of the social condition of their northern neighbours, we repeat, the body of the English, at this period, were singularly ignorant. We had not very long before suffered the penalty of adherence to a fallen cause. We were considered to be still rather too irritable and dangerous for much interference; perhaps, also, it was thought that it might be cheaper to leave us to ourselves—and, so long as we paid our proportion of the common taxation, not to enquire too curiously into our own domestic system of management. In all respects, therefore, notwithstanding the war, we flourished.

Peace came; and with peace, as a matter of course, a more searching investigation into the internal state of the country. Then, for the first time, Scotland became a sort of marvel. Our agriculture, our commerce, our internal resources, so strangely and quickly augmented, attracted the attention of the politician; and the question was speedily mooted—"How, and by what means, have so poor a nation as the Scotch attained so singular a position?" And truly the facts were startling, and such as might justify an enquiry. The whole coined money in Scotland, at the date of the Union, was known not to have exceeded the sum of one million sterling; and a large part of this paltry sum was necessarily hoarded, and so withdrawn from circulation, throughout the whole period of the intestine troubles. That single million, therefore, held the place both of that part of the wealth of the country which is now represented by bank-notes, and also of that which is now deposited in the hands of the bankers. Aladdin's palace, which sprang up in one night at the bidding of the slaves of the lamp, could scarcely have been a greater paradox to the aged Sultan, than this increase of prosperity on the part of Scotland was to our southern legislators. How to explain the metamorphosis seemed for a time a mystery. One thing, at all events, was clear—that English gold had no participation in the change. North of the Tweed, a guinea was a suspected article, apt to be rung, and examined, and curiously weighed, before it was received in currency, and even then accepted with a certain reluctance. The favourite medium of circulation was paper-notes of one pound each, of somewhat dubious complexion to the eye of the stranger, but received and circulated by the Scottish people with the utmost readiness and confidence. The answer to the question was a short one—"We have prospered through our banking system."

It was some time—not until ten years of peace had elapsed—before any open attack was made upon that system, which had proved, if facts can prove any thing, the greatest imaginable boon to the nation; and which, be it always specially remembered, did not originate with the state, but with private individuals—upright, honourable, and patriotic men—who better deserve a monument to their memories, were that required, than the most successful conqueror whose march is on humbled thrones....