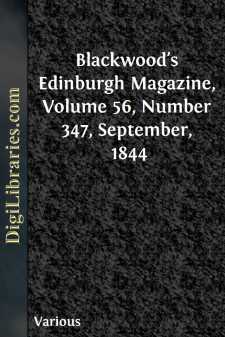 M. Louis Blanc, a democratic journalist, with all, and perhaps more than the usual talents of the Parisian journalist—with all, and more than the usual faults of one—has undertaken to write the history of his country, during and since the revolution of 1830. What can we expect to be the result of such an undertaking? What can we expect from a man who sits down to a task of this description, animated with all the party virulence which gives zest to a democratic newspaper? It is not a history, but a scandal, that he will write. M. Louis Blanc has distilled the bile of journalism; he has paused over the hasty sarcasm which political animosity deals forth, not to correct, or moderate, or abate, but merely to point and envenom it. His appreciation of men, their character, their talents, their designs—all bear the hue of the atrabilious journalist. There is this difference only between his history and the daily portion of envy and malignity which a democratic newspaper pours forth, that the dye is more deeply engrained. In the mind of the author, the stain of his party has become ineffaceable. Those who are pleased—and the number is not few—with having high names and established reputations laid at their feet, soiled, trod upon, will meet here with ample gratification. To be sure they will be occasionally required, in lieu of such as they have thrown down, to set up the bust of some democratic celebrity, whose greatness, or whose genius, they were not previously aware of. But, not to say that the justice of party requires this substitution, it is a penalty which writers of this description will invariably impose upon them. It is the common trick of the envious, and the mock magnanimity with which they seek to conceal their true nature—to exalt the lowly, while they debase the exalted. Since some idol there must be, let it be one of their raising. Even while helping to raise it, they enjoy, too, the secret consciousness that it is of brittle metal.

But in the composition of a history, the spirit of party, however eager it may be, cannot always guide the pen. The mere interest of the narrative, the strangeness and peculiarity of circumstances, will claim their share of the author’s mind. The politician must sometimes be absorbed in the chronicler; and so it happens with M. Louis Blanc. His narrative often interests by its details; and if it has the partiality, it has also the vivacious colouring, of a contemporary. It possesses, also, a richness of anecdote—the fruit, probably, of his position as a   journalist; add to which, that M. Louis Blanc is not without a species of off-hand, dashing eloquence. He can say daring things in a daring manner, and give the pungency of epigram to his political paradoxes. He has a full share of that rhetoric of journalism which is so well calculated to make an impression on the careless reader, but which requires that the reader should continue careless, in order to retain the impression he has received....