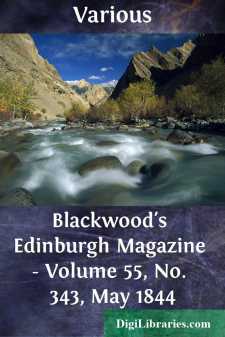 THE INCREASE OF CRIME.

Among the many causes of anxiety which the present state of society in the British empire must occasion to every thoughtful or reflecting mind—one of the most extraordinary and alarming is, the constant and uninterrupted increase of crime. The Liberals shut their eyes to this, because it affords a sad illustration of the effect of their favourite theories, which for a quarter of a century have been, under the direction of his Majesty's Ministry or his Majesty's Opposition, in almost ceaseless operation. The selfish and inconsiderate (and they form the vast majority of men) give themselves no sort of trouble about the matter: they care not though their neighbours are murdered or robbed, plundered or swindled, so as they escape unscathed themselves; and without either thinking on the subject, or suggesting one remedy for its evils, interfere only, with stentorian lungs, to resist any project to arrest them having the remotest tendency to terminate in an assessment. Their principle is to take of civilisation only its fruits, and steadily to withstand the concomitant evils; and the simple way by which they think this is to be effected—is quietly, and without saying a word, to reap the benefit of manufacturing industry in the doubling or tripling of their incomes; but to roar out like madmen if the smallest per centage is proposed to be laid on them, to arrest or mitigate the evils which that industry brings in its train. Government meanwhile, albeit fully aware of the danger, is not sufficiently strong to do any thing to avert it; its own majority is paralysed by the inherent selfishness of mankind; and nothing but some great and stunning public calamity can, it is universally felt, awaken the country to a sense of the evils growing out of its greatness, but threatening in the end to endanger its existence. Thus nothing is done, or at least nothing effectual is done, to avert the dangers: every one shuts his eyes to them, or opens them only to take measures to avert an assessment; and meanwhile crime advances with the steps of a giant, sweeping whole classes of society into its vortex, and threatening to spread corruption and vice, in an incredible manner, through the densest and most dangerous classes of the community.

Authentic and irrefragable evidence of the magnitude of this danger exists in the statistical tables of committals which have now, for a very considerable time, been prepared in all parts of the British empire. Since the year 1805, when regular tables of commitments first began to be kept in England, commitments have increased sixfold: they have swelled from five to thirty-one thousand. During the same period population has advanced about sixty per cent: in other words, detected crime has advanced FOUR TIMES AS FAST AS THE NUMBERS OF THE PEOPLE. Unwilling as we are to load our pages with statistical tables—which, attractive to the thinking few, are repulsive to the unthinking many—we must yet request our readers to cast their eyes to the bottom of the pages, where these appalling truths are demonstrated by the parliamentary returns....