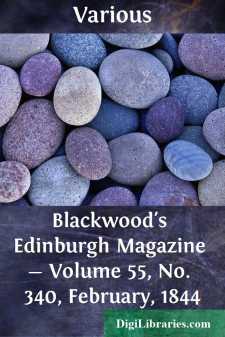 It is now about three centuries since Richard Chancellor, pilot-major of the fleet which, under the command of Sir Hugh Willoughby, and by the advice of Sebastian Cabot, set out to discover a north-east passage to China, carried his ship, the Edward Bonaventura, into Archangel. The rest of the fleet put into a haven on the coast of Lapland, where all their crews, with the gallant commander, perished miserably of cold and hunger. Chancellor, accompanied by Master George Killingworthe, found his way to Moscow, where he was courteously entertained by the Tsar Iván IV., surnamed the Terrible. On his return to England in 1554, he delivered a friendly letter from the Tsar to King Edward VI., and announced to the people of England "the discovery of Muscovy." The English adventurers where mightily astonished by the state and splendour of the Russian court, and gave a curious account of their intercourse with the tyrant Iván, who treated them with great familiarity and kindness, though he was perhaps the most atrocious monster, not excepting the worst of the Roman emperors, that ever disgraced a throne. The Tsar "called them to his table to receive each a cup from his hand to drinke, and took into his hand Master George Killingworthe's beard, which reached over the table, and pleasantly delivered it to the metropolitan, who seeming to bless it, said in Russ, 'This is God's gift;' as indeed at that time it was not only thicke, broad, and yellow coulered, but in length five foot and two inches of a size."

Chancellor returned the following year to Moscow, and arranged with the Tsar the commercial privileges and immunities of a new company of merchant-adventurers who desired to trade with Muscovy; but in 1556, while on his way home, accompanied by Osep Neped, the first Russian ambassador to the court of England, their ship was wrecked on our own coast, at Pitsligo bay, where Chancellor was drowned, with most of the crew; but Osep Neped, who escaped, was conducted with much pomp to London, and there established on a firmer basis the commercial relations between the two countries, to which Chancellor's discovery had led, and of which he had laid the foundation. The commerce thus begun has continued uninterrupted, to the mutual advantage of both nations, up to this time, and thousands of our countrymen have there gained wealth and distinction, in commerce, in the arts, in science, and in arms.

But of the twenty-seven millions of men, women, and children who people Great Britain and Ireland, how many may be presumed to know any thing of Russian literature, or even to have enquired whether it contains any thing worth knowing? Are there a dozen literary men or women amongst us who could read a Russian romance, or understand a Russian drama? Dr Bowring was regarded as a prodigy of polyglot learning, because he gave us some very imperfect versions of Russian ballads; and we were thankful even for that contribution, from which, we doubt not, many worthy and well-informed people learned for the first time that Russia produced poets as well as potashes....