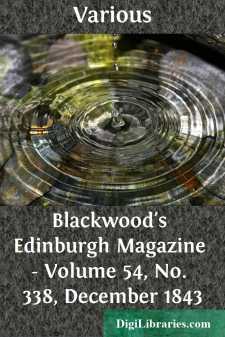 At a time when the eye of the public is more remarkably, and we trust more kindly, directed to the Fine Arts, we may do some service to the good cause, by reverting to those lectures delivered in the Royal Academy, composed in a spirit of enthusiasm honourable to the professors, but which kindled little sympathy in an age strangely dead to the impulses of taste. The works, therefore, which set forth the principles of art, were not read extensively at the time, and had little influence beyond the walls within which they were delivered. Favourable circumstances, in conjunction with their real merit, have permanently added the discourses of Sir Joshua Reynolds to the standard literature of our country. They have been transferred from the artist to the scholar; and so it has happened, that while few of any pretension to scholarship have not read the "The Discourses," they have not, as they should have, been continually in the hands of artists themselves. To awaken a feeling for this kind of professional reading—yet not so professional as not to be beneficial—reflectingly upon classical learning; indeed, we might say, education in general, and therefore more comprehensive in its scope—we commenced our remarks on the discourses of Sir Joshua Reynolds, which have appeared in the pages of Maga. There are now more than symptoms of the departure of that general apathy which prevailed, when most of the Academy lectures were delivered. It will be, therefore, a grateful, and may we hope a useful, task, by occasional notices to make them more generally known.

The successors of Reynolds labour under a twofold disadvantage; they find that he has occupied the very ground they would have taken, and written so ably and fully upon all that is likely to obtain a general interest, as to leave a prejudice against further attempts. Of necessity, there must be, in every work treating of the same subject, much repetition; and it must require no little ingenuity to give a novelty and variety, that shall yet be safe, and within the bounds of the admitted principles of art. On this account, we have no reason to complain of the lectures of Fuseli, which we now purpose to notice. Bold and original as the writer is, we find him every where impressed with a respect for Reynolds, and with a conviction of the truth of the principles which he had collected and established. If there be any difference, it is occasionally on the more debatable ground—particular passages of criticism.

In the "Introduction," the student is supplied with a list of the authorities he should consult for the "History and Progress of his Art." He avoids expatiating on the books purely elementary—"the van of which is led by Leonardo da Vinci and Albert Durer, and the rear by Gherard Lavresse—as the principles which they detail must be supposed to be already in the student's possession, or are occasionally interwoven with the topics of the lectures;" and proceeds "to the historically critical writers, who consist of all the ancients yet remaining, Pausanias excepted." Fortunately, there remain a sufficient number of the monuments of ancient art "to furnish us with their standard of style;" for the accounts are so contradictory, that we should have little to rely upon. The works of the ancient artists are all lost: we must be content with the "hasty compilations of a warrior," Pliny, or the "incidental remarks of an orator," (rhetorician,) Quintilian. The former chiefly valuable when he quotes—for then, as Reynolds observed, "he speaks the language of an artist:" as in his account of the glazing method of Apelles; the manner in which Protogenes embodied his colours; and the term of art circumlitio, by which Nicias gave "the line of correctness to the models of Praxiteles;" the foreshortening the bull by Pausias, and throwing his shade on the crowd—showing a forcible chiaroscuro. "Of Quintilian, whose information is all relative to style, the tenth chapter of the XII.th book, a passage on expression in the XI.th, and scattered fragments of observations analogous to the process of his own art, is all that we possess; but what he says, though comparatively small in bulk, with what we have of Pliny, leaves us to wish for more. His review of the revolutions of style in painting, from Polygnotus to Apelles, and in sculpture, from Phidias to Lysippus, is succinct and rapid; but though so rapid and succinct, every word is poised by characteristic precision, and can only be the result of long and judicious enquiry, and perhaps even minute examination." Still less have we scattered in the writings of Cicero, who, "though he seems to have had little native taste for painting and sculpture, and even less than he had taste for poetry, had a conception of nature; and with his usual acumen, comparing the principles of one art with those of another, frequently scattered useful hints, or made pertinent observations....