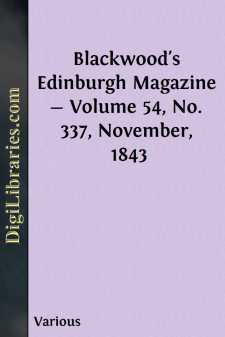 ADVENTURES IN TEXAS. NO. 1. A SCAMPER IN THE PRAIRIE OF JACINTO.

Reader! Were you ever in a Texian prairie? Probably not. I have been; and this was how it happened. When a very young man, I found myself one fine morning possessor of a Texas land-scrip—that is to say, a certificate of the Galveston Bay and Texas Land Company, in which it was stated, that in consideration of the sum of one thousand dollars, duly paid and delivered by Mr Edward Rivers into the hands of the cashier of the aforesaid company, he, the said Edward Rivers, was become entitled to ten thousand acres of Texian land, to be selected by himself, or those he should appoint, under the sole condition of not infringing on the property or rights of the holders of previously given certificates.

Ten thousand acres of the finest land in the world, and under a heaven compared to which, our Maryland sky, bright as it is, appears dull and foggy! It was a tempting bait; too good a one not to be caught at by many in those times of speculation; and accordingly, our free and enlightened citizens bought and sold their millions of Texian acres just as readily as they did their thousands of towns and villages in Ohio, Indiana, Illinois, and Michigan, and their tens of thousands of shares in banks and railways. It was a speculative fever, which has since, we may hope, been in some degree cured. At any rate, the remedies applied have been tolerably severe.

I had not escaped the contagion, and, having got the land on paper, I thought I should like to see it in dirty acres; so, in company with a friend who had a similar venture, I embarked at Baltimore on board the Catcher schooner, and, after a three weeks' voyage, arrived in Galveston Bay.

The grassy shores of this bay, into which the river Brazos empties itself, rise so little above the surface of the water, to which they bear a strong resemblance in colour, that it would be difficult to discover them, were it not for three stunted trees growing on the western extremity of a long lizard-shaped island that stretches nearly sixty miles across the bay, and conceals the mouth of the river. These trees are the only landmark for the mariner; and, with their exception, not a single object—not a hill, a house, nor so much as a bush, relieves the level sameness of the island and adjacent continent.

After we had, with some difficulty, got on the inner side of the island, a pilot came on board and took charge of the vessel. The first thing he did was to run us on a sandbank, off which we got with no small labour, and by the united exertions of sailors and passengers, and at length entered the river. In our impatience to land, I and my friend left the schooner in a cockleshell of a boat, which upset in the surge, and we found ourselves floundering in the water. Luckily it was not very deep, and we escaped with a thorough drenching.

When we had scrambled on shore, we gazed about us for some time before we could persuade ourselves that we were actually upon land. It was, without exception, the strangest coast we had ever seen, and there was scarcely a possibility of distinguishing the boundary between earth and water....