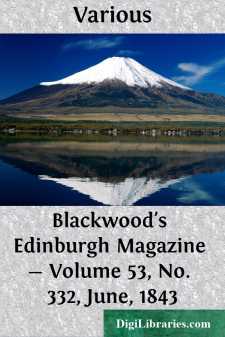 "Have I not in my time heard lions roar?

Have I not heard the sea, puft up with wind,

Have I not heard great ordnance in the field,

And heaven's artillery thunder in the skies?

Have I not in the pitched battle heard

Why I give the world a sketch of my career through it, is not among the discoveries which I intend to make. I have been a public man; let those who know public life imagine what interest may be felt in reviewing the scenes and struggles of which such a life is full. May there not be a pleasure in conceiving once again the shapes and circumstances of things, as one sitting by his fireside sees castles and cottages, men, women, and children in the embers, and shapes them the better for the silence and the solitude round him? Let the reader take what reason he will. I have seen the world, and fought my way through it; have stumbled, like greater men, have risen, like lesser; have been flung into the most rapid current of the most hurried, wild, and vivid time that the world has ever seen—I have lived through the last fifty years. In all the vigour of my life, I have mingled in some of the greatest transactions, and been mingled with some of the greatest men, of my time. Like one who has tumbled down Niagara, and survived the fall, though I have reached still water, the roar of the cataract is yet in my ears; and I can even survey it with a fuller gaze, and stronger sense of its vastness and power, than, when I was rolling down its precipice.

I have been soldier, adventurer, traveller, statesman. I have been lover, husband, father—poor and opulent; obscure and conspicuous. There are few sensations of our nature, or circumstances of our life, which I have not undergone. Alternately suffering to the verge of ruin, and enjoying like an epicurean deity: I have been steeped in poverty to the lips; I have been surcharged with wealth. I have sacrificed, and fearfully, to the love of power; I have been disgusted with its possession. I figured in the great Babel until I loved even its confusion of tongues; I grew weary of it, until I hated the voice of man.

Every man is born for a special purpose, and with a special passion. The multitude, possessing both, exhibit neither; they are flung, or choose to be flung, into the pond, where they float only to perish, like blind puppies. But there are others who stem the great tide, and are only the stronger for the struggle. From my first sense, the passion to be known and felt, nay, at the expense of being feared, was my impulse. It has been the impulse of all men who have ever impressed the world. With great talents it is all-commanding: the thunderbolt in the hands of Jove. Even with inferior faculties, and I make no pretence of mine, it singularly excites, urges, and animates. When the prophet saw the leopard winged, he saw a miracle; I claim for my powers only those of the muscle and sinew....