Black Rock: a Tale of the Selkirks 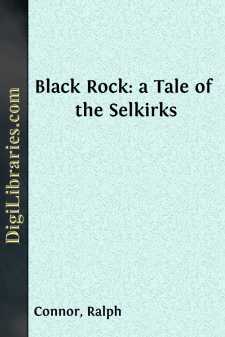 CHAPTER I CHRISTMAS EVE IN A LUMBER CAMP

It was due to a mysterious dispensation of Providence, and a good deal to Leslie Graeme, that I found myself in the heart of the Selkirks for my Christmas Eve as the year 1882 was dying. It had been my plan to spend my Christmas far away in Toronto, with such Bohemian and boon companions as could be found in that cosmopolitan and kindly city. But Leslie Graeme changed all that, for, discovering me in the village of Black Rock, with my traps all packed, waiting for the stage to start for the Landing, thirty miles away, he bore down upon me with resistless force, and I found myself recovering from my surprise only after we had gone in his lumber sleigh some six miles on our way to his camp up in the mountains. I was surprised and much delighted, though I would not allow him to think so, to find that his old-time power over me was still there. He could always in the old 'Varsity days—dear, wild days—make me do what he liked. He was so handsome and so reckless, brilliant in his class-work, and the prince of half-backs on the Rugby field, and with such power of fascination, as would 'extract the heart out of a wheelbarrow,' as Barney Lundy used to say. And thus it was that I found myself just three weeks later—I was to have spent two or three days,—on the afternoon of the 24th of December, standing in Graeme's Lumber Camp No. 2, wondering at myself. But I did not regret my changed plans, for in those three weeks I had raided a cinnamon bear's den and had wakened up a grizzly—But I shall let the grizzly finish the tale; he probably sees more humour in it than I.

The camp stood in a little clearing, and consisted of a group of three long, low shanties with smaller shacks near them, all built of heavy, unhewn logs, with door and window in each. The grub camp, with cook-shed attached, stood in the middle of the clearing; at a little distance was the sleeping-camp with the office built against it, and about a hundred yards away on the other side of the clearing stood the stables, and near them the smiddy. The mountains rose grandly on every side, throwing up their great peaks into the sky. The clearing in which the camp stood was hewn out of a dense pine forest that filled the valley and climbed half way up the mountain-sides, and then frayed out in scattered and stunted trees.

It was one of those wonderful Canadian winter days, bright, and with a touch of sharpness in the air that did not chill, but warmed the blood like draughts of wine. The men were up in the woods, and the shrill scream of the blue jay flashing across the open, the impudent chatter of the red squirrel from the top of the grub camp, and the pert chirp of the whisky-jack, hopping about on the rubbish-heap, with the long, lone cry of the wolf far down the valley, only made the silence felt the more.

As I stood drinking in with all my soul the glorious beauty and the silence of mountain and forest, with the Christmas feeling stealing into me, Graeme came out from his office, and, catching sight of me, called out, 'Glorious Christmas weather, old chap!' And then, coming nearer, 'Must you go to-morrow?'

'I fear so,' I replied, knowing well that the Christmas feeling was on him too....