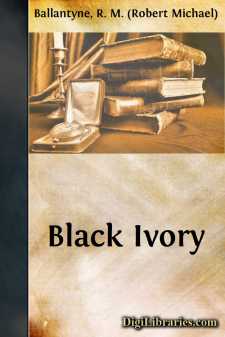 In writing this book, my aim has been to give a true picture in outline of the Slave Trade as it exists at the present time on the east coast of Africa.

In order to do this I have selected from the most trustworthy sources what I believe to be the most telling points of “the trade,” and have woven these together into a tale, the warp of which is composed of thick cords of fact; the woof of slight lines of fiction, just sufficient to hold the fabric together. Exaggeration has easily been avoided, because—as Dr Livingstone says in regard to the slave-trade—“exaggeration is impossible.”

If the reader’s taste should be offended by finding the tragic and comic elements in too close proximity I trust that he will bear in remembrance that “such is life,” and that the writer who would be true to life must follow, not lead, nature.

I have to acknowledge myself indebted to Dr Ryan, late Bishop of Mauritius; to the Rev. Charles New, interpreter to the Livingstone Search Expedition; to Edward Hutchinson, Esquire, Lay Secretary to the Church Missionary Society, and others, for kindly furnishing me with information in connexion with the slave trade.

Besides examining the Parliamentary Blue-books which treat of this subject, I have read or consulted, among others, the various authoritative works to which reference is made in the foot-notes sprinkled throughout this book,—all of which works bear the strongest possible testimony to the fact that the horrible traffic in human beings is in all respects as bad at the present time on the east coast of Africa as it ever was on the west coast in the days of Wilberforce.

I began my tale in the hope that I might produce something to interest the young (perchance, also, the old) in a most momentous cause,—the total abolition of the African slave-trade. I close it with the prayer that God may make it a tooth in the file which shall eventually cut the chains of slavery, and set the black man free.

Chapter One. Shows that a Good Beginning may Sometimes be Followed by a Bad Ending.

That would not have been a pleasant announcement to the captain of the ‘Aurora’ at any time, but its unpleasantness was vastly increased by the fact that it greeted him near the termination of what had been, up to that point of time, an exceedingly prosperous voyage.

“Are you sure, Davis?” asked the captain; “try again.”

He gave the order under the influence of that feeling which is styled “hoping against hope,” and himself accompanied the ship’s carpenter to see it obeyed.

“Six feet two inches,” was the result of this investigation.

The vessel, a large English brig, had sprung a leak, and was rolling heavily in a somewhat rough sea off the east coast of Africa. It was no consolation to her captain that the shores of the great continent were visible on his lee, because a tremendous surf roared along the whole line of coast, threatening destruction to any vessel that should venture to approach, and there was no harbour of refuge nigh....