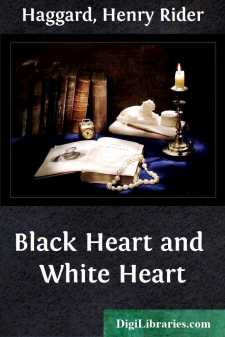 At the date of our introduction to him, Philip Hadden was a transport-rider and trader in "the Zulu." Still on the right side of forty, in appearance he was singularly handsome; tall, dark, upright, with keen eyes, short-pointed beard, curling hair and clear-cut features. His life had been varied, and there were passages in it which he did not narrate even to his most intimate friends. He was of gentle birth, however, and it was said that he had received a public school and university education in England. At any rate he could quote the classics with aptitude on occasion, an accomplishment which, coupled with his refined voice and a bearing not altogether common in the wild places of the world, had earned for him among his rough companions the soubriquet of "The Prince."

However these things may have been, it is certain that he had emigrated to Natal under a cloud, and equally certain that his relatives at home were content to take no further interest in his fortunes. During the fifteen or sixteen years which he had spent in or about the colony, Hadden followed many trades, and did no good at any of them. A clever man, of agreeable and prepossessing manner, he always found it easy to form friendships and to secure a fresh start in life. But, by degrees, the friends were seized with a vague distrust of him; and, after a period of more or less application, he himself would close the opening that he had made by a sudden disappearance from the locality, leaving behind him a doubtful reputation and some bad debts.

Before the beginning of this story of the most remarkable episodes in his life, Philip Hadden was engaged for several years in transport-riding—that is, in carrying goods on ox waggons from Durban or Maritzburg to various points in the interior. A difficulty such as had more than once confronted him in the course of his career, led to his temporary abandonment of this means of earning a livelihood. On arriving at the little frontier town of Utrecht in the Transvaal, in charge of two waggon loads of mixed goods consigned to a storekeeper there, it was discovered that out of six cases of brandy five were missing from his waggon. Hadden explained the matter by throwing the blame upon his Kaffir "boys," but the storekeeper, a rough-tongued man, openly called him a thief and refused to pay the freight on any of the load. From words the two men came to blows, knives were drawn, and before anybody could interfere the storekeeper received a nasty wound in his side. That night, without waiting till the matter could be inquired into by the landdrost or magistrate, Hadden slipped away, and trekked back into Natal as quickly as his oxen would travel. Feeling that even here he was not safe, he left one of his waggons at Newcastle, loaded up the other with Kaffir goods—such as blankets, calico, and hardware—and crossed into Zululand, where in those days no sheriff's officer would be likely to follow him.

Being well acquainted with the language and customs of the natives, he did good trade with them, and soon found himself possessed of some cash and a small herd of cattle, which he received in exchange for his wares....