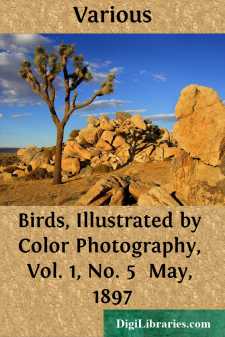 “There swims no goose so gray, but soon or late,She takes some honest gander for a mate;”There live no birds, however bright or plain,But rear a brood to take their place again.—C. C. M.

UITE the jolliest season of the year, with the birds, is when they begin to require a home, either as a shelter from the weather, a defence against their enemies, or a place to rear and protect their young. May is not the only month in which they build their nests, some of our favorites, indeed, waiting till June, and even July; but as it is the time of the year when a general awakening to life and activity is felt in all nature, and the early migrants have come back, not to re-visit, but to re-establish their temporarily deserted homes, we naturally fix upon the first real spring month as the one in which their little hearts are filled with titillations of joy and anticipation.

In May, when the trees have put on their fullest dress of green, and the little nests are hidden from all curious eyes, if we could look quite through the waving branches and rustling leaves, we should behold the little mothers sitting upon their tiny eggs in patient happiness, or feeding their young broods, not yet able to flutter away; while in the leafy month of June, when Nature is perfect in mature beauty, the young may everywhere be seen gracefully imitating the parent birds, whose sole purpose in life seems to be the fulfillment of the admonition to care well for one’s own.

There can hardly be a higher pleasure than to watch the nest-building of birds. See the Wren looking for a convenient cavity in ivy-covered walls, under eaves, or among the thickly growing branches of fir trees, the tiny creature singing with cheerful voice all day long. Observe the Woodpecker tunneling his nest in the limb of a lofty tree, his pickax-like beak finding no difficulty in making its way through the decayed wood, the sound of his pounding, however, accompanied by his shrill whistle, echoing through the grove.

But the nest of the Jay: Who can find it? Although a constant prowler about the nests of other birds, he is so wary and secretive that his little home is usually found only by accident. And the Swallow: “He is the bird of return,” Michelet prettily says of him. If you will only treat him kindly, says Ruskin, year after year, he comes back to the same niche, and to the same hearth, for his nest. To the same niche! Think of this a little, as if you heard of it for the first time.

But nesting-time with the birds is one of sentiment as well as of industry The amount of affectation in lovemaking they are capable of is simply ludicrous. The British Sparrow which, like the poor, we have with us always, is a much more interesting bird in this and other respects than we commonly give him credit for. It is because we see him every day, at the back door, under the eaves, in the street, in the parks, that we are indifferent to him. Were he of brighter plumage, brilliant as the Bobolink or the Oriole, he would be a welcome, though a perpetual, guest, and we would not, perhaps, seek legislative action for his extermination....