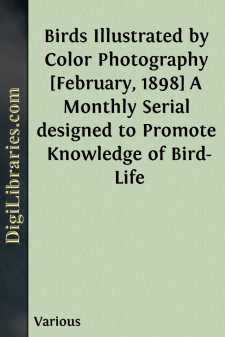 SUPPOSE that a habit of minute observation of nature is one of the most difficult things to acquire, as it is one which is less generally pursued than any other study. In almost all departments of learning and investigation there have been numberless works published to illustrate them, and text books would fill the shelves of a large library. Thoreau in his “Walden” has shown an extremely fine and close observation of the scenes in which his all too short life was passed, but his object does not seem at any time to have been the study of nature from an essential love of it, or to add to his own or the world’s knowledge. On the contrary, nature was the one resource which enabled him to exemplify his notions of independence, which were of such a sturdy and uncompromising character that Mr. Emerson, who had suffered some inconvenience from his experience of Thoreau as an inmate of his household, thought him fitter to meet occasionally in the open air than as a guest at table and fireside. There is a delicious harmony with nature in all that he has written, but his descriptions of out-of-door life invite us rather to indolent musing than to investigation or study. Who after reading Izaak Walton ever went a-fishing with the vigor and enterprise of Piscator? Washington Irving allowed his cork to drift with the current and lay down in the shadow of a spreading oak to dream with the beloved old author.

In White’s “Natural History of Selborne” we have a unique book indeed, but of a far more general interest than its title would indicate. Pliny, the elder, was the father of natural history but to many of us Gilbert White is entitled to that honor. To an early edition of the book, without engravings, and much abridged, as compared with Bohn’s, published in 1851, many owe their first interest in the subject.

Mr. Ireland in his charming little “Book Lover’s Enchiridion,” tells us that when a boy he was so delighted with it, that in order to possess a copy of his own (books were not so cheap as now) he actually copied out the whole work. In a list of one hundred books, Sir John Lubbock mentions it as “an inestimable blessing.” Edward Jesse, author of “Gleanings in Natural History” attributes his own pursuits as an out-door naturalist entirely to White’s example. Much of the charm of the book consists in the amiable character of the author, who

“——lived in solitude, midst trees and flowers,Life’s sunshine mingling with its passing showers;No storms to startle, and few clouds to shadeThe even path his Christian virtues made.”

Very little is known of him beyond what he has chosen to mention in his diaries, which were chiefly records of his daily studies and observations, and in his correspondence, from which the “history” is in fact made up. From these it is evident that his habits were secluded and that he was strongly attached to the charms of rural life. He says the greater part of his time was spent in literary occupations, and especially in the study of nature. He was born July 18, 1720, in the house in which he died. His father was his first instructor in natural history, and to his brother Thomas, a fellow of the Royal Society, he was indebted for many suggestions for his work. It is also to his brother’s influence that we owe the publication of the book, as it required much persuasion to induce the philosopher to pass through the ordeal of criticism, “having a great dread of Reviewers,” those incorrigible bêtes noires of authors. His brother promising himself to review the work in the “Gentleman’s Magazine,” White reluctantly consented to its publication. The following short abstract from the review will show its quality, as well as suggest a possible answer to the current question propounded by students of the census.

“Contemplative persons see with regret the country more and more deserted every day, as they know that every well-regulated family of property which quits a village to reside in a town, injures the place that is forsaken in material circumstances. It is with pleasure, therefore, we observe that so rational an employment of leisure hours as the study of nature promises to become popular, since whatever adds to the number of rural amusements, and consequently counteracts the allurements of the metropolis is, on this consideration, of national importance.”

It is to be feared, however, that many stronger influences than this of the study of nature will be necessary to keep the young men of the present day from the great cities....