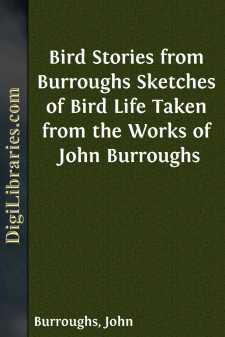 It is sure to be a bright March morning when you first hear the bluebird's note; and it is as if the milder influences up above had found a voice and let a word fall upon your ear, so tender is it and so prophetic, a hope tinged with a regret.

There never was a happier or more devoted husband than the male bluebird. He is the gay champion and escort of the female at all times, and while she is sitting he feeds her regularly. It is very pretty to watch them building their nest. The male is very active in hunting out a place and exploring the boxes and cavities, but seems to have no choice in the matter and is anxious only to please and encourage his mate, who has the practical turn and knows what will do and what will not. After she has suited herself he applauds her immensely, and away the two go in quest of material for the nest, the male acting as guard and flying above and in advance of the female. She brings all the material and does all the work of building, he looking on and encouraging her with gesture and song. He acts also as inspector of her work, but I fear is a very partial one. She enters the nest with her bit of dry grass or straw, and, having adjusted it to her notion, withdraws and waits near by while he goes in and looks it over. On coming out he exclaims very plainly, "Excellent! excellent!" and away the two go again for more material.

I was much amused one summer day in seeing a bluebird feeding her young one in the shaded street of a large town. She had captured a cicada or harvest-fly, and, after bruising it awhile on the ground, flew with it to a tree and placed it in the beak of the young bird. It was a large morsel, and the mother seemed to have doubts of her chick's ability to dispose of it, for she stood near and watched its efforts with great solicitude. The young bird struggled valiantly with the cicada, but made no headway in swallowing it, when the mother took it from him and flew to the sidewalk, and proceeded to break and bruise it more thoroughly. Then she again placed it in his beak, and seemed to say, "There, try it now," and sympathized so thoroughly with his efforts that she repeated many of his motions and contortions. But the great fly was unyielding, and, indeed, seemed ridiculously disproportioned to the beak that held it. The young bird fluttered and fluttered, and screamed, "I'm stuck, I'm stuck!" till the anxious parent again seized the morsel and carried it to an iron railing, where she came down upon it for the space of a minute with all the force and momentum her beak could command. Then she offered it to her young a third time, but with the same result as before, except that this time the bird dropped it; but she reached the ground as soon as the cicada did, and taking it in her beak flew a little distance to a high board fence, where she sat motionless for some moments. While pondering the problem how that fly should be broken, the male bluebird approached her, and said very plainly, and I thought rather curtly, "Give me that bug," but she quickly resented his interference and flew farther away, where she sat apparently quite discouraged when I last saw her.