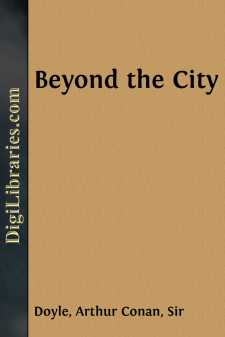 CHAPTER I. THE NEW-COMERS.

"If you please, mum," said the voice of a domestic from somewhere round the angle of the door, "number three is moving in."

Two little old ladies, who were sitting at either side of a table, sprang to their feet with ejaculations of interest, and rushed to the window of the sitting-room.

"Take care, Monica dear," said one, shrouding herself in the lace curtain; "don't let them see us.

"No, no, Bertha. We must not give them reason to say that their neighbors are inquisitive. But I think that we are safe if we stand like this."

The open window looked out upon a sloping lawn, well trimmed and pleasant, with fuzzy rosebushes and a star-shaped bed of sweet-william. It was bounded by a low wooden fence, which screened it off from a broad, modern, new metaled road. At the other side of this road were three large detached deep-bodied villas with peaky eaves and small wooden balconies, each standing in its own little square of grass and of flowers. All three were equally new, but numbers one and two were curtained and sedate, with a human, sociable look to them; while number three, with yawning door and unkempt garden, had apparently only just received its furniture and made itself ready for its occupants. A four-wheeler had driven up to the gate, and it was at this that the old ladies, peeping out bird-like from behind their curtains, directed an eager and questioning gaze.

The cabman had descended, and the passengers within were handing out the articles which they desired him to carry up to the house. He stood red-faced and blinking, with his crooked arms outstretched, while a male hand, protruding from the window, kept piling up upon him a series of articles the sight of which filled the curious old ladies with bewilderment.

"My goodness me!" cried Monica, the smaller, the drier, and the more wizened of the pair. "What do you call that, Bertha? It looks to me like four batter puddings."

"Those are what young men box each other with," said Bertha, with a conscious air of superior worldly knowledge.

Two great bottle-shaped pieces of yellow shining wood had been heaped upon the cabman.

"Oh, I don't know what those are," confessed Bertha. Indian clubs had never before obtruded themselves upon her peaceful and very feminine existence.

These mysterious articles were followed, however, by others which were more within their range of comprehension—by a pair of dumb-bells, a purple cricket-bag, a set of golf clubs, and a tennis racket. Finally, when the cabman, all top-heavy and bristling, had staggered off up the garden path, there emerged in a very leisurely way from the cab a big, powerfully built young man, with a bull pup under one arm and a pink sporting paper in his hand. The paper he crammed into the pocket of his light yellow dust-coat, and extended his hand as if to assist some one else from the vehicle. To the surprise of the two old ladies, however, the only thing which his open palm received was a violent slap, and a tall lady bounded unassisted out of the cab....