Beside the Still Waters A Sermon 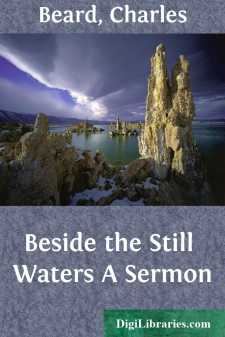 BESIDE THE STILL WATERS.

"He leadeth me beside the still waters."Psalm xxiii. 2.

There has been a period of geological speculation, at which all the changes which have taken place upon the earth's surface, and have left their unmistakable marks in countless relics of animal and vegetable life, were attributed to the action of sudden and violent forces, of which, to-day, earthquake and tempest and volcano are only the feeble and transitory types. Those changes have manifestly been so great and so universal, as to stand out in vivid contrast to the imperceptibly slow, the gently gradual processes, which are all that we are now able to watch and to record: surely we can attribute them only to causes as exceptional as themselves. We see Niagara cutting its backward way through the ravine, so many feet in a thousand years; the lava stream descends the mountain-side like a black and burning glacier, and destruction too plainly marks its path; a storm bursts upon the hills, and for long miles the valleys are choked with barren mud, the bridges scattered in ruin through the stream, the cheerful husbandry of men laid hopelessly waste. But we cannot watch the slow upheaval of a long line of coast, where the fisherman hardly knows at the end of a lifetime whether the sea has drawn back or his own landmarks have been moved; we are all unable to note how new continents are now being formed in the ocean's stillest depths, from whose hardened and uplifted strata future ages may dig out the relics of so much that has been dear and precious to us; we fail to notice how every running stream, from the tiniest mountain rill to muddy Po and fertilizing Nile, is perpetually at work to carry down the hills into the plains, and to change the world's familiar face. But so it is, and so, we have some right to conclude, it has been always. God's chosen ways of working in the physical world are not wholly of the sudden and violent sort. Storm and earthquake and flood have undoubtedly played their part; but not more than—perhaps hardly as much as—the perpetually dropping rain, the wind that seems to blow as it listeth, the tides that come and go and no man heeds them, the sun that shines upon barren rock and fertile meadow with serene impartiality of blessing. God seems to work, by preference, slowly and in silence. To Him a thousand years are but as yesterday when it is past, and the dial on which His operations are recorded takes no note of human thoughts and expectations.

The same is true, I think, in the moral world. It is indeed difficult to over-estimate the force of a great soul; though it is needful to remark that not all great souls work in the full light of publicity and have their path marked by revolution, and equally needful to remember that not all dislocating and disturbing spirits put forth any true claim to greatness. We are far too apt to confound the occasions with the causes of any great change, and to forget that if fire do indeed come out of a noble heart, it can only kindle other hearts that are already prepared to burn....