Beside the Bonnie Brier Bush 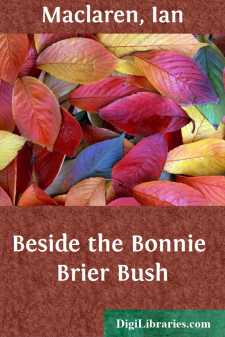 The Revolution reached our parish years ago, and Drumtochty has a School Board, with a chairman and a clerk, besides a treasurer and an officer. Young Hillocks, who had two years in a lawyer's office, is clerk, and summons meetings by post, although he sees every member at the market or the kirk. Minutes are read with much solemnity, and motions to expend ten shillings upon a coal-cellar door passed, on the motion of Hillocks, seconded by Drumsheugh, who are both severely prompted for the occasion, and move uneasily before speaking.

Drumsheugh was at first greatly exalted by his poll, and referred freely on market days to his "plumpers," but as time went on the irony of the situation laid hold upon him.

"Think o' you and me, Hillocks, veesitin' the schule and sittin' wi' bukes in oor hands watchin' the Inspector. Keep's a', it's eneuch to mak' the auld Dominie turn in his grave. Twa meenisters cam' in his time, and Domsie put Geordie Hoo or some ither gleg laddie, that was makin' for college, thro' his facin's, and maybe some bit lassie brocht her copybuke. Syne they had their dinner, and Domsie tae, wi' the Doctor. Man, a've often thocht it was the prospeck o' the Schule Board and its weary bit rules that feenished Domsie. He wasna maybe sae shairp at the elements as this pirjinct body we hae noo, but a'body kent he was a terrible scholar and a credit tae the parish. Drumtochty was a name in thae days wi' the lads he sent tae college. It was maybe juist as weel he slippit awa' when he did, for he wud hae taen ill with thae new fikes, and nae college lad to warm his hert."

The present school-house stands in an open place beside the main road to Muirtown, treeless and comfortless, built of red, staring stone, with a playground for the boys and another for the girls, and a trim, smug-looking teacher's house, all very neat and symmetrical, and well regulated. The local paper had a paragraph headed "Drumtochty," written by the Muirtown architect, describing the whole premises in technical language that seemed to compensate the ratepayers for the cost, mentioning the contractor's name, and concluding that "this handsome building of the Scoto-Grecian style was one of the finest works that had ever come from the accomplished architect's hands." It has pitch-pine benches and map-cases, and a thermometer to be kept at not less than 58° and not more than 62°, and ventilators which the Inspector is careful to examine. When I stumbled in last week the teacher was drilling the children in Tonic Sol-fa with a little harmonium, and I left on tiptoe.

It is difficult to live up to this kind of thing, and my thoughts drift to the auld schule-house and Domsie. Some one with the love of God in his heart had built it long ago, and chose a site for the bairns in the sweet pine-woods at the foot of the cart road to Whinnie Knowe and the upland farms. It stood in a clearing with the tall Scotch firs round three sides, and on the fourth a brake of gorse and bramble bushes, through which there was an opening to the road....