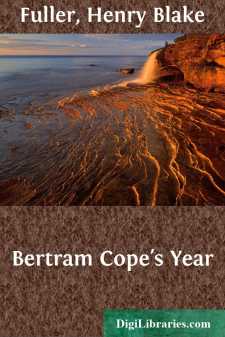 COPE AT A COLLEGE TEA

What is a man's best age? Peter Ibbetson, entering dreamland with complete freedom to choose, chose twenty-eight, and kept there. But twenty-eight, for our present purpose, has a drawback: a man of that age, if endowed with ordinary gifts and responsive to ordinary opportunities, is undeniably—a man; whereas what we require here is something just a little short of that. Wanted, in fact, a young male who shall seem fully adult to those who are younger still, and who may even appear the accomplished flower of virility to an idealizing maid or so, yet who shall elicit from the middle-aged the kindly indulgence due a boy. Perhaps you will say that even a man of twenty-eight may seem only a boy to a man of seventy. However, no septuagenarian is to figure in these pages. Our elders will be but in the middle forties and the earlier fifties; and we must find for them an age which may evoke their friendly interest, and yet be likely to call forth, besides that, their sympathy and their longing admiration, and later their tolerance, their patience, and even their forgiveness.

I think, then, that Bertram Cope, when he began to intrigue the little group which dwelt among the quadruple avenues of elms that led to the campus in Churchton, was but about twenty-four,—certainly not a day more than twenty-five. If twenty-eight is the ideal age, the best is all the better for being just a little ahead.

Of course Cope was not an undergraduate—a species upon which many of the Churchtonians languidly refused to bestow their regard. "They come, and they go," said these prosperous and comfortable burghers; "and, after all, they're more or less alike, and more or less unrewarding." Besides, the Bigger Town, with all its rich resources and all its varied opportunities, lay but an hour away. Churchton lived much of its real life beyond its own limits, and the student who came to be entertained socially within them was the exception indeed.

No, Bertram Cope was not an undergraduate. He was an instructor; and he was working along, in a leisurely way, to a degree. He expected to be an M.A., or even a Ph.D. Possibly a Litt.D. might be within the gift of later years. But, anyhow, nothing was finer than "writing"—except lecturing about it.

"Why haven't we known you before?" Medora T. Phillips asked him at a small reception. Mrs. Phillips spoke out loudly and boldly, and held his hand as long as she liked. No, not as long as she liked, but longer than most women would have felt at liberty to do. And besides speaking loudly and boldly, she looked loudly and boldly; and she employed a determined smile which seemed to say, "I'm old enough to do as I please." Her brusque informality was expected to carry itself off—and much else besides. "Of course I simply can't be half so intrepid as I seem!" it said. "Everybody about us understands that, and I must ask your recognition too for an ascertained fact."

"Known me?" returned Cope, promptly enough. "Why, you haven't known me because I haven't been here to be known." He spoke in a ringing, resonant voice, returning her unabashed pressure with a hearty good will and blazing down upon her through his clear blue eyes with a high degree of self-possession, even of insouciance....