Bert Wilson in the Rockies 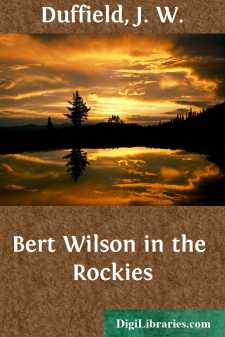 A shower of glass from the shattered windowpane fell over the floor and seats, and a bullet embedded itself in the woodwork of an upper berth. There was a shriek from the women passengers in the crowded Pullman, and the men looked at each other in consternation. From the platform came the sound of a scuffle, interspersed with oaths. Then, through the narrow corridor that bordered the smoking-room, hurried two men, pushing the terrified negro porter ahead of them. Each of the intruders wore a black cloth tied over the lower part of his face, and before the bewildered passengers knew what had happened they found themselves looking along the blue-black barrels of two ugly revolvers.

It was a startling break in an uneventful day. For several hours the Overland Limited had hummed along over the boundless prairies that stretched away on either side with scarcely a break to the horizon. They had time to make up, and on these open spaces the engineer had let it out to the limit. So swiftly and smoothly had it sped along that the "click, click" as it struck each separate rail had merged into one droning "song of the road."

There had been no rain for a week past, and the dust lay thick on the grass and cactus. The motion of the train drew it up in clouds that made it impossible to keep the windows raised, and the sun, beating down pitilessly from a brazen sky, added to the general discomfort. Cooling drinks were at a premium, and the porters were kept busy making trips to the buffet car, from which they returned with tinkling glasses and cooling ices. Collars wilted and conversation languished. Women glanced listlessly over the pages of the magazines. Men drew their traveling caps over their eyes and settled down for a doze. Here and there a commercial traveler jotted down some item or wondered how far he dared to "pad" his expense account so that it would "get by" the lynx-eyed head of the firm. In the smoking-room a languid game of cards was being played, in an effort to beguile the tedious monotony of the trip. Over all there brooded a spirit of somnolence and relaxation.

If there was life to be discerned anywhere, it was in a group of three young fellows seated near the middle of the car. They would have drawn more than a passing glance wherever seen. Tall, well set up, muscular, they served as splendid types of young American manhood. None of them were over twenty, and their lean, bronzed faces, as well as the lithe alertness of their movements, spoke of a life spent largely in the open. They were brimming with life and high spirits. Exuberant vitality shone through their eyes and betrayed itself in every gesture. That they were friends of long standing was evident from the utter absence of ceremony and the free and easy comradeship with which they chaffed each other.

From the beginning of the trip they had been full of fun and merriment. Their college year had just closed, and they were like frolicsome colts turned out to pasture. There was hardly an incident of the journey that did not furnish to their keen, unjaded senses something of interest and amusement....