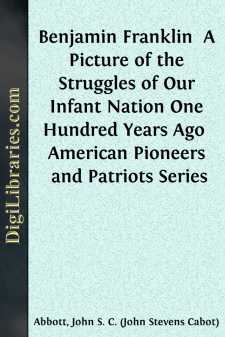 Next to George Washington, we must write, upon the Catalogue of American Patriots, the name of Benjamin Franklin. He had so many virtues that there is no need of exaggerating them; so few imperfections that they need not be concealed. The writer has endeavored to give a perfectly accurate view of his character, and of that great struggle, in which he took so conspicuous a part, which secured the Independence of the United States. Probably there can no where be found, within the same limits, so vivid a picture of Life in America, one hundred years ago, as the career of Franklin presents.

This volume is the twelfth of the Library Series of Pioneers and Patriots. The series presents a graphic history of our country from its discovery.

1. Christopher Columbus reveals to us the West Indies, and gives a narrative of wonders unsurpassed in fact or fable.

2. De Soto conducts us to Florida, and leads us through scenes of romance, crime, blood and woe—through many Indian tribes, across the continent, to the Mississippi, where he finds his melancholy grave.

3. La Salle, and his heroic companions, traversed thousands of miles of majestic lakes and unknown rivers, and introduces us to innumerable barbaric tribes. There is no other writer, who, from his own personal observation, can give one so vivid an idea of Life in the Indian village and wigwam.

4. Miles Standish was the Captain of the Pilgrims. He conducts us in the May Flower, across the Atlantic, lands us at Plymouth, and tells the never to be forgotten story of the heroism of our fathers in laying the foundations of this great republic.

5. Captain Kidd, and the Buccaneers, reveal to us the awful condition of North and South America, when there was no protecting law here, and when pirates swept sea and land, inflicting atrocities, the narrative of which causes the ear which hears it to tingle.

6. Peter Stuyvesant takes us by the hand, and introduces us to the Dutch settlement at the mouth of the Hudson, conveys us, in his schooner, up the solitary river, along whose forest-covered banks Indian villages were scattered; and reveals to us all the struggles, by which the Dutch New Amsterdam was converted into the English New York.

7. Benjamin Franklin should chronologically take his place here. There is probably not, in the compass of all literature, a biography more full of entertainment and valuable thought, than a truthful sketch of the career of Benjamin Franklin. He leads us to Philadelphia, one hundred and fifty years ago, and makes us perfectly familiar with life there and then. He conducts us across the Atlantic to the Court of St. James, and the Court of Versailles. There is no writer, French or English, who has given such vivid sketches of the scenes which were witnessed there, as came from the pen of Benjamin Franklin. For half a century Franklin moved amid the most stupendous events, a graphic history of which his pen has recorded.

8. George Washington has no superior. Humanity is proud of his name....