Ben, the Luggage Boy; or, Among the Wharves 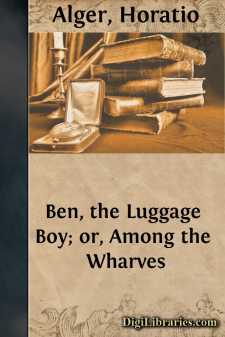 "How much yer made this mornin', Ben?"

"Only an apple. That's all I've eaten since yesterday. It's most time for the train to be in from Philadelphy. I'm layin' round for a job."

The first speaker was a short, freckled-faced boy, whose box strapped to his back identified him at once as a street boot-black. His hair was red, his fingers defaced by stains of blacking, and his clothing constructed on the most approved system of ventilation. He appeared to be about twelve years old.

The boy whom he addressed as Ben was taller, and looked older. He was probably not far from sixteen. His face and hands, though browned by exposure to wind and weather, were several shades cleaner than those of his companion. His face, too, was of a less common type. It was easy to see that, if he had been well dressed, he might readily have been taken for a gentleman's son. But in his present attire there was little chance of this mistake being made. His pants, marked by a green stripe, small around the waist and very broad at the hips, had evidently once belonged to a Bowery swell; for the Bowery has its swells as well as Broadway, its more aristocratic neighbor. The vest had been discarded as a needless luxury, its place being partially supplied by a shirt of thick red flannel. This was covered by a frock-coat, which might once have belonged to a member of the Fat Men's Association, being aldermanic in its proportions. Now it was fallen from its high estate, its nap and original gloss had long departed, and it was frayed and torn in many places. But among the street-boys dress is not much regarded, and Ben never thought of apologizing for the defects of his wardrobe. We shall learn in time what were his faults and what his virtues, for I can assure my readers that street boys do have virtues sometimes, and when they are thoroughly convinced that a questioner feels an interest in them will drop the "chaff" in which they commonly indulge, and talk seriously and feelingly of their faults and hardships. Some do this for a purpose, no doubt, and the verdant stranger is liable to be taken in by assumed virtue, and waste sympathy on those who do not deserve it. But there are also many boys who have good tendencies and aspirations, and only need to be encouraged and placed under right influences to develop into worthy and respectable men.

The conversation recorded above took place at the foot of Cortlandt Street, opposite the ferry wharf. It was nearly time for the train, and there was the usual scene of confusion. Express wagons, hacks, boys, laborers, were gathering, presenting a confusing medley to the eye of one unaccustomed to the spectacle.

Ben was a luggage boy, his occupation being to wait at the piers for the arrival of steamboats, or at the railway stations, on the chance of getting a carpet-bag or valise to carry. His business was a precarious one. Sometimes he was lucky, sometimes unlucky. When he was flush, he treated himself to a "square meal," and finished up the day at Tony Pastor's, or the Old Bowery, where from his seat in the pit he indulged in independent criticism of the acting, as he leaned back in his seat and munched peanuts, throwing the shells about carelessly.

It is not surprising that the street-boys like the Old Bowery, and are willing to stint their stomachs, or run the risk of a night in the streets, for the sake of the warm room and the glittering illusions of the stage, introducing them for the time being to the society of nobles and ladies of high birth, and enabling them to forget for a time the hardships of their own lot, while they follow with rapt interest the fortunes of Lord Frederic Montressor or the Lady Imogene Delacour....